Christmas comes to The Sims FreePlay 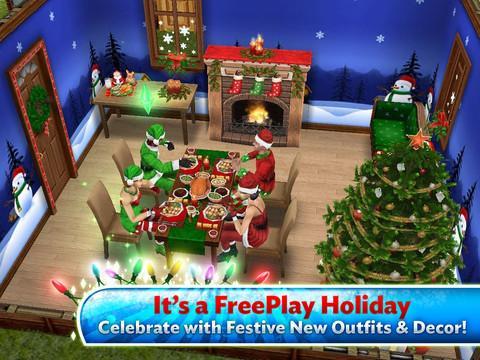 Fans of The Sims FreePlay (and I know there are a lot of you), rejoice! The game has just received a major update in honor of its one-year anniversary, ushering in a heap of new content — some of which is Christmas-themed.

Players who update the game will be greeted with a chance to partake in the “12 Days of Christmas” quest. Santa’s sleigh is broken, and he needs your help fixing it up. I’m no genius, but I’m pretty sure you only have 12 days to do this. And should you be up to the task, you’ll receive a present on Christmas! Otherwise you get nothing and Christmas is probably ruined. No pressure, though.

As for non-Christmas content, this update also introduces fishing to the game. If you manage to catch all 12 of the fish varieties, you earn a reward. But if fishing isn’t your style, you can become a fashion designer and create your own fashion line. Who knows, maybe Santa will let you design a new outfit for him!

If you haven’t played The Sims FreePlay before, now seems like a pretty good time to remedy that. We had all sorts of nice things to say about it in our review, and that was before we were presented with the opportunity to help Santa fix his sleigh.