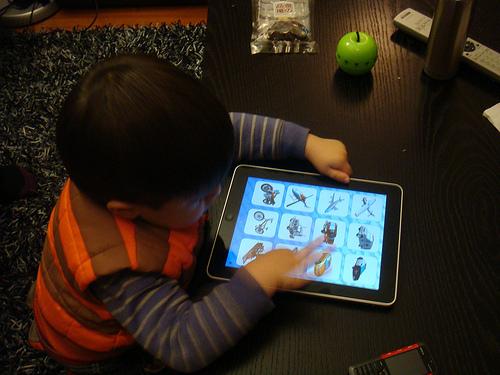 If mobile is a whole new world for gaming, kids gaming is a whole new universe for mobile. You’re dealing with an audience who’s less limited by their pocketbooks and preferences, and more by attention spans and nap times. As designers, parents, or caretakers, we may think we know what’s fun, connecting at a child’s level? That’s a whole different cup of tea… or warm milk, whichever.

At this year’s Casual Connect, Carla Fisher took the stage help bridge that gap. As President & Founder of No Crusts Interactive, Fisher works daily on the creation of games and apps that are designed from the ground up with kids in mind. Her advice was refreshing and on-point for a space where so much seems to be guesswork. So I’ve decided to take a page out of my own childhood, and share.

Both inside an app and out, it’s important to realize that we take touch for granted. When we boot up our home screen, surf effortlessly from side to side, open an app, and start tapping inside of it, we have clear expectations for what our actions will do. Kids, on the other hand, “often obscure parts of the interface with their finger,” and conflate one of their actions with another, thereby missing more subtle cues.

The solution? Use bright, iconic designs to draw their attention to the app as a button that should be pressed. And once it’s open, really change things upon touch, says Fisher. Avoid less noticeable effects in favor of “something larger than their finger… to help them realize that their input was recognized.” Nothing peaks fascination and wonderment like the idea that a child has control over a small, touch-based universe.

Think back to your time as a kid. Muddy jeans, scraped elbows, spilled drinks. Sufficed to say, you were probably very… hands on. The same goes for the youth of today, whose first instinct when they see a touch screen is to, quite broadly, touch. Expecting them to realize it’s important exactly where from the get-go is an exercise in futility. This, Fisher says, is why it’s important to be more accommodating, and less punitive, about grown app rules. Okay, fine, that’s my pun for the article.

For example, apps should leave a safe zone around the edges of play or to help mitigate the frequent unintentional screen touches that will occur as a child orients the device in their hands. Working on a phone? Put icons that control features or settings in the lower corners, where younger players are less likely to touch too enthusiastically. In the mean time, abandon the idea, argues Fisher, that things like “drag and drop” work the way we think they do. For kids with little experience and high distractability, it’s probably better to make an app with “drag and drop and drag some more and maybe drop a couple more times,” which permits them to complete an expected action in parts, not a whole go.

Remember, says Fisher: “Multi-touch, swiping, scrolling are all learned behaviors – kids are incredibly smart and can pick them up, but these are learned behaviours.” 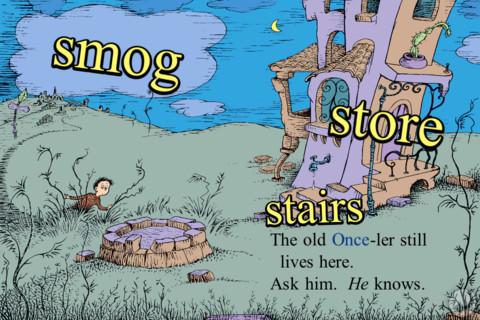 Lesson 3: bells and whistles are fine, but avoid white noise

The app market for kids may be a different playing field, but it’s still unavoidably a competition to rank and get noticed. As a result, the temptation to win kids over with “tons of things to see and do!” might seem overwhelming. To hear s tell it, however, there is most certainly such a thing as too much fun.

Think of it this way: bells and whistles should support the narrative gameplay, or teaching methods of your product, not simply exist for the purpose of existing. From a value standpoint, this gives kids more opportunities to take something away from their play time. Fisher points here to something like The Lorax, where individual words can be tapped to bring their giant counterparts up on screen, allowing kids to teach themselves vocabulary while discovering easter eggs. But it’s about much more than “teachable moments.”

As customers with short attention spans and authority figures playing the app alongside them, kids will often move on to something else if a point doesn’t emerge immediately. And does a tree fall in a sound effect-laden vista full of interactive animals if no one is around to tap it?

Lesson 4: don’t be a virtual predator!

In fairness, this sentence is true no matter what context you consider it in, but with kid games, says Fisher, a little ethics go a long way. In an industry that’s become positively wound up with excitement at the prospect of “aggressive monetization” and “ARPU” (average revenue per user), designing apps for children is a breath of fresh air. Or at least, it should be.

The best apps which are most likely to endear themselves to parents and caretakers (read: spenders!) are those that provide a clear separation of church and state, where spending real cash is concerned. That means: don’t pack the game with buttons that could lead a child immediately to an in-app purchase with mommy and daddy’s connected iTunes credit card. Don’t hide the things that are most enjoyable and playful behind barriers of payment. And don’t tantalize kids with “gotta have them!” fluff that they can’t earn through play.

Instead, try designing an experience that lends itself to making in app purchases to expand the content kids are enjoying. New storybooks, more lessons. Be generous with premium currency before charging for it as a way to teach kids the value of money and working hard to earn something. Hey, even create some internal password locks on in-app-currency menus! Fisher didn’t even mention that one, but consider it a freebie from yours truly. The next one? You have to pay to upgrade in order to see.

Have you ever told a young child that they’re playing a board game wrong? Or using their lego to build the “wrong” thing? It probably didn’t go so well. In many cases, kids glean as much fun from creating the method of play in their had as they do from following the rules; in many cases from a combination of the two. Using Dance Central’s Kinect functionality as an example, Fisher argues that it’s far better to work with a young player than against them here. (After all, they’re probably more stubborn than you anyway.)

Pointing to the adorable video you see above, she points out that some of the best “wins” a game can deliver – unbound play, true socialization, impromptu cooperation – come from loosing young kids on a game environment where rules are guideposts, not blockers. In the context of  Dance Central, this is achieved through the Kinect’s ignorance of more than two bodies, allowing players to participate for the sheer fun of it.

In mobile, then, the best games for kids arguably resist the need to limit how many touches the screen can take, err on the side of imprecise input demands, and acknowledge the most important thing of all: kids will be kids.