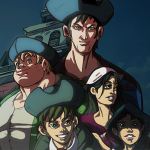 A recent video uploaded to Lantana Games’ YouTube account details the voice actors who are providing voices for a few of the characters in Children of Liberty. Attentive gamers may recognize a few of the voice actors included. Ashly Burah (Tiny Tina from Borderlands 2), Chris Ciulla (various Fallout: New Vegas characters), and Sarah Elmaleh (Katie from Gone Home) have all signed on to voice characters in Children of Liberty.

Lantana Games’ upcoming historically-accurate 2D stealth platformer, Children of Liberty, promises “fast and fluid” gameplay with hide and seek stealth mechanics. History buffs should take note that Children of Liberty is set to tell the tale of Paul Revere’s famous night ride, and the mysterious events that led up to that iconic moment in American history.

“Children of Libertyfills in the plot holes of the tale of Paul Revere’s ride while remaining historically accurate,” the game’s official website states. “Play as either Joseph, the classic platformer; Ally, the nimble freerunner; Doug, the burly tank; or Sarah, the bratty eight-year old ninja, and live out the events of the hours leading up to the American Revolution.”

Children of Liberty is due out this Spring.