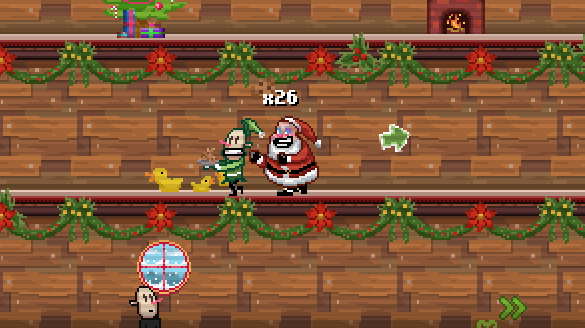 In the recent Ludum Dare 28 game jam and competition, thousands of developers submitted their games as a show of skill, in pride of what they accomplished during the 48-hour competition or the 72-hour game jam. One of those games is UndergroundPixel’s Christmas Cookie Craze, a fun (and festive) platformer.

The theme for Ludum Dare 28 was “You Only Get One” and UndergroundPixel wove the theme into their game by making it the game’s catalyst. In Christmas Cookie Craze, Santa comes home to the North Pole after delivering presents all night, eager to sit down and relax with milk and cookies. For whatever reason, Santa’s pesky elves decided that he can only have one cookie. Understandably, the big guy is a bit upset and so he goes on the hunt for any cookie-hoarding elf he can get his hands on.

Players use the Arrow-keys to navigate through Santa’s workshop, collecting cookie crumbs and running down any elf they come across. During the chase, a timer counts down the remaining time left for the level. If players fail to catch all the elves during the allotted time, it is game over.

Christmas Cookie Craze is UndergroundPixel’s fifth Ludum Dare entry, and not their first Ludum Dare Christmas entry, either. During Ludum Dare 25 (December 14-17, 2012), UndergroundPixel produced Holly Jolly Pyromaniac, a game where players soar over the town of the North Pole as Santa in his sleigh, dropping bombs down onto the houses of the elves who are revolting.

The Humble Puppy Bundle features Revenge of the Titans, Droid Assault, and more