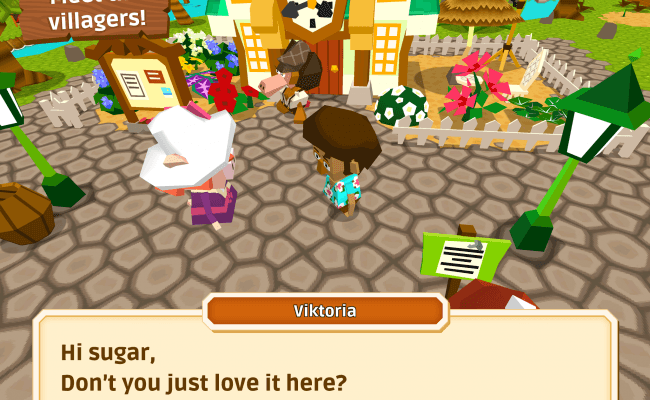 If there’s one game type that is egregiously missing from the ever-growing trove of the App Store, it’s the Animal Crossing-like life sim.  Even with vaguely similar entries like Happy Street and The Sims 3 available on iOS, nothing quite scratches our itch for a colorful, cartoony world where you can spend all day fishing or decorating your den—until now.  Castaway Paradise by Stolen Couch Games intends to fill that gap and then some, offering a living, breathing world that is inspired by Animal Crossing but expands upon it in ways that will keep players busy, challenged, and right at home.

Castaway Paradise takes place on a collection of islands that gradually open up as the game progresses.  Players will assume the role of their personally designed avatar, who washes up on shore and decides to make the most of their shipwrecked situation.  While you’ll start with only a small, donated tent to house your few belongings—basically the clothes and seaweed on your back—it’s easy to begin making money and become a productive member of island society.  Similar to Animal Crossing, fishing and bug-catching are lucrative means to expand your coffers, but the bucks don’t stop there.  “Animal Crossing is the obvious inspiration indeed,” Eric Diepeveen, co-founder and game designer at Stolen Couch Games told Gamezebo.  “We’re diverging from that game by making the gameplay deeper and more task-oriented. We like Animal Crossing, but we’re not huge fans per se. My personal problem with the game is the lack of tasks.  That’s why I designed Castaway Paradise more like a social game.

“In Castaway Paradise you’ll always have three tasks to do. They are optional, but the rewards are worth it. You get new items, money, and XP.  When you level up, you get new equipment and unlock even more items to buy.  There is a lovely flow to the game, always something to do and unlock.”  These quests are handed out by the townsanimals and range in requirements, from catching specific types of fish to building a lighthouse on the beach.  Since the game takes place in real time, some quests will come with time limits, but an unwanted task can be resigned to make room for another one at any time.

For anyone tired of running errands for the local baboon, Castaway Paradise will also feature a vibrant farming mechanic.  A wide variety of crops, like eggplants and peppers, can be grown on a timer.  While this brings to mind Farmville at first blush, Diepeveen associates it with another Nintendo favorite.  “Right now, the farming mechanics of Castaway Paradise are deeper than its Harvest Moon counterpart. We implemented a match-3 mechanic for farming, for example. It’s super fun and makes farming a more cognitive experience.”  Farming is currently limited to plants only, although ranching is a future possibility.  “As for pets, it’s something we’d love to add.  Since we’ll be constantly adding features, it might happen.”

One of those new features could be synchronous multiplayer, according to Diepeveen.  “Multiplayer is one of the most requested features and also one of the most difficult ones to make. Our goal with multiplayer is to have a completely seamless experience.  For example: you’re playing the game on your PC.  You’re catching some bugs, having fun. At the same time, I start the game on my iPhone while I’m in the train. Without doing anything, the game knows we’re friends and I can visit your island.  And poof—I’m there catching bugs together with you. There’s no lobby system, no complicated Nintendo-like sign-up hassle. It’s super exciting!” 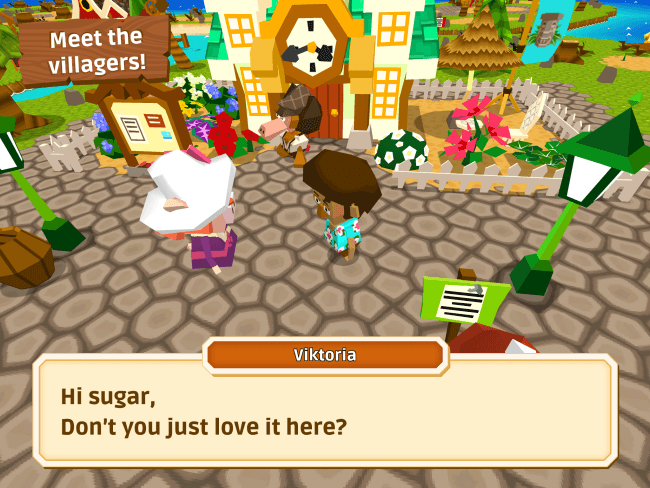 Currently, however, the game is single-player only—but with plenty to see and do.  There are hundreds of items to collect and use, including furniture and outfits to decorate your home and body.  And the items Castaway Paradise will launch with are only the tip of the island.  “We will support Castaway Paradise as long as we can!  Since the start of the soft launch in Canada, we’ve been releasing updates to the game every five days,” Diepeveen said.  “Each update adds new items, clothing, and gameplay. Last week, we completely re-skinned the game for the holidays.  And right now we’re working on doing the same for Valentine’s Day.”

With that many items to collect and potentially purchase, Castaway Paradise‘s freemium model might worry some players.  The Stolen Couch team has been listening to players’ feedback and adjusting where they feel it is necessary.  “We built Castaway Paradise as a free-to-play game from the ground up for mobile,” Diepeveen said.  “We haven’t changed our strategy for mobile.  However, when we posted our game on Steam Greenlight, a lot of very vocal people wanted/demanded a premium version of the game without in-app purchases.  Although we haven’t decided anything for Steam yet, we are thinking of ways to make those people happy.  One thing we have added to the game is a premium subscription model that will basically make Castaway Paradise a less free-to-play game. It’s perfect for premium fans.” 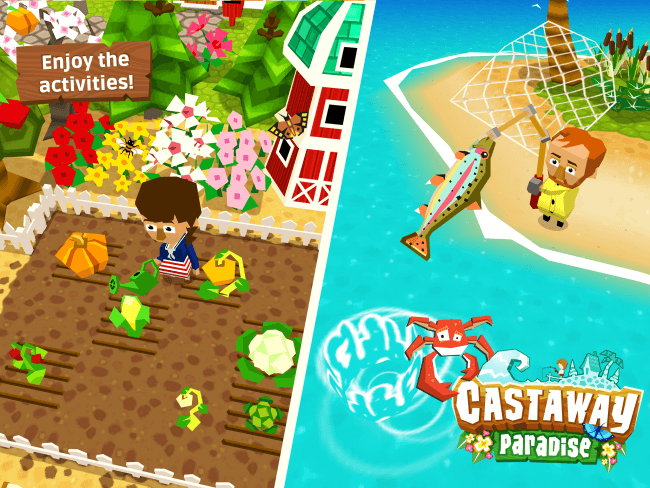 Although a potential mobile or PC release date is still to be determined, gamers in Canada can check out Castaway Paradise‘s soft-launched beta right now.  Beta testers will have an active voice in the sim’s direction as Diepeveen and team are still hard at work on the game every day.  “We’ve been working on Castaway Paradise for over a year and a half already and we’re not done yet,” Diepeveen said.  “It’s a huge undertaking.  We’ve poured all our money and energy in this game. And we’re super glad there still isn’t anything like it on mobile.

“We think Castaway Paradise will stand tall between all the generic casual games on the app stores. Castaway Paradise is such a rich experience and has a very broad appeal.  If you’re a player that just wants to decorate your house and island, we’ve got you covered.  If you like to min-max and make a huge amount of money in the game, no problem. It’s going to be great.”

We think so, too.  To stay up-to-date on Castaway Paradise‘s progress and release in other countries, click the “Follow” link above.