Home / News / Cartoon Crush Might Be Your Next Casual Gaming Fix

Cartoon Crush Might Be Your Next Casual Gaming Fix 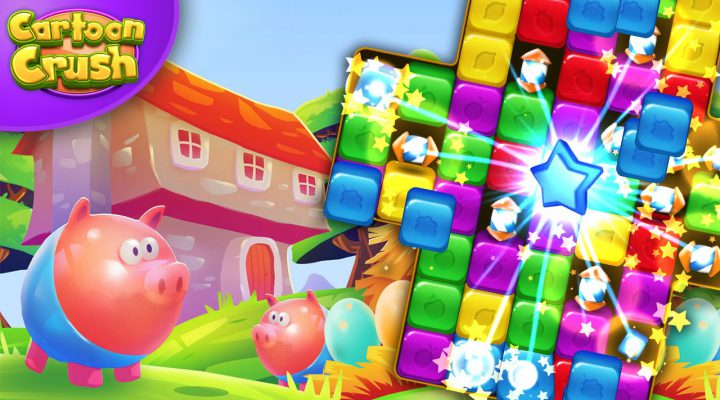 Nothing scratches that casual gaming itch like a matching puzzler, and Cartoon Crush looks like a model example of the genre.

Crammed full of colorful backdrops, fun characters, and visually stimulating effects, it sees you tapping the screen to clear chunks of matching blocks. Others blocks drop into their place, creating more potential matches, and so the cycle continues.

Tapping two matching blocks simply clears a space, while clearing more generates boosters like the rocket, the magic barrel, the color star, and others.

They do stuff like clearing whole rows or columns, annihilating a section of the screen, or wiping out every block of a certain color. You can even combine boosters by tapping adjacent ones, unlocking powerful new effects.

The aim in each level is to clear a set number of a specified kind of color, and the challenge lies in clearing them in the right order. Instead of rashly stabbing at clusters you need to plan your approach, manipulating the layout of the board to create larger blocks for more powerful boosters.

If you’ve never played one of these games before, trust us – it’s amazingly addictive.

Cartoon Crush comes with over 600 levels, and they get trickier and more involved as you move through the campaign, with new elements and challenges constantly being added. It’ll take you weeks to get through them.

Plus, there are several multiplayer features, including leaderboards, daily and weekly tournaments, and team play, where you join up with a group of Facebook friends to share lives and compete in events together.

And, of course, all the bells and whistles you’d expect from a top-flight mobile casual game are in there too, including daily login bonuses, reward chests, and even a daily wheel of fortune.

Cartoon Crush seems to be going down well, with a massive 4.7 average review score on Google Play and 4.8 on the App Store. Download it for free right now on Android and iOS.

Heroes, Bosses, and More in the MU Origin 11.0 Update