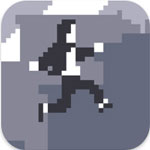 As one of the most popular indie games in recent years, Canabalt has become a mainstay of many an iPhone gamers diet. Now iPad players can get in on the action too, as version 1.4 was just released on the App Store.

Version 1.4 turns the previously iPhone-only game into a universal app, which will let players experience the game natively on either device. This means iPad gamers who already own the game on their iPhone’s won’t need to repurchase the app to enjoy it on the larger screen.

In addition to the transition to universal app, version 1.4 brings new music from Danny Barnowsky and tweaks related to the impending release of iOS 4.