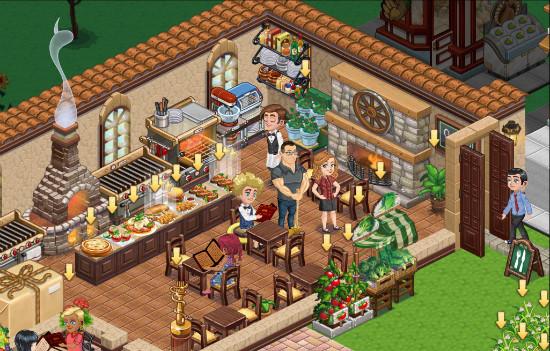 Everybody’s favorite muscle bound chef Robert Irvine is undergoing a dramatic reduction in size.  As of today, his prodigious neck, biceps, and culinary skills have been shrunk down and recast in the cartoony, big-eyed sheen of Zynga’s Ville series.  The Ville game in which he has taken up residence is, of course, ChefVille, and he can be found there for the next two weeks.

Jonathan Knight, the general manager of ChefVille, is understandably excited about these two disparate media franchises crossing streams.  Knight says, “We’re constantly looking at unique ways to bring the online and offline worlds of our players together in more meaningful ways, so we were delighted to partner with Food Network and Robert Irvine.  The lure of owning a restaurant is more popular than ever. Robert is not only driving the mainstream popularity of cooking, but also has the culinary chops to help players bring their dream of owning a successful restaurant to life in ChefVille.”

Irvine is likewise breathlessly enthusiastic about his cameo.  He says, “As an avid fan of social games I am extremely excited about partnering with Zynga on this interactive culinary journey. Zynga continues to be a pioneering force in the world of social gaming. I couldn’t be more honored to have an avatar of myself and Restaurant: Impossible be a part of ChefVille, as we lend insight to players on what it takes to create their dream restaurant while earning my approval.” What a little virtual dictator!

The in-game Irvine will offer players a handful — or should I say a pinch! — of new quest lines, asking them to “gather ingredients,” “spice it up,” and more.  Irvine won’t stay on the menu forever though.  If you want to see his cartoon forearms for yourself, you’ve got two weeks to do it.  Get it while it’s hot!

Casting has begun for Draw Something game show