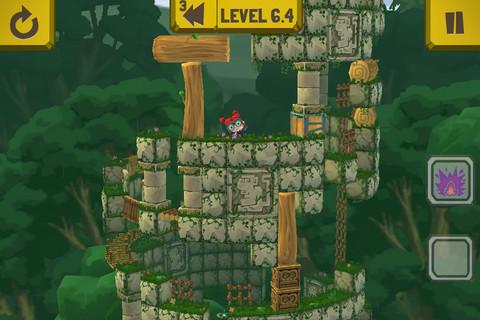 Buzz Monkey isn’t your average casual game developer. They’ve developed AAA titles with the likes of EA, Activision, and Eidos, and are headlined by the simple phrase: “We make games. We are, in fact, quite good at it”. Considering their past releases, we were a bit surprised to find them venturing into the depths of mobile gaming, but their iOS puzzle platformer contains the same passion and effort as their console releases.

In light of their great new puzzle title, Rinth Island, we had a chance to talk with Buzz Monkey about their expansion to mobile gaming, their new title, and their plans for the future.

We’ve noticed a recent trend of more mainstream developers incorporating casual game experiences into their libraries. The Buzz Monkey team has previously worked on AAA titles like Tomb Raider: Underworld and Tony Hawk RIDE. How did you end up developing a game like Rinth Island?

I suppose the trend is partly out of necessity, a huge shift away from console, toward social and mobile games has been happening. This happened to match up with a prototype a small team of monkeys put together based on the original game idea from Stan Patton (of award winning Block Rogue fame). We really only had to look at the prototype once and work began assembling the team right away.

We know your first two apps (Block Rogue and Fluid Monkey) were self-published, while Rinth Island’s release has you paired up with Chillingo. How are you finding the experience?

Working with Chillingo on Rinth Island has been an excellent experience! So far it’s a perfect match, we focus on making the game, and Chillingo focuses on publishing the game.

Assuming you love iOS titles as much as we loved yours, what are some of the games on the App Store that inspire you?

We do love iOS games! Plants vs Zombies, World of Goo, Cut the Rope, JetPack Joyride, and Temple Run would be on our short list.

We know Rinth Island began on Facebook through the Unity 3D player, but its port to iOS has been nearly flawless. What’s the experience like moving from the web to a mobile device?

Because of the great tools and solid platform Apple provides, in addition to Unity’s portable development system, we really got to focus on optimizing the game experience on mobile devices.

Are there any puzzle-platformers that served as your inspiration while developing Rinth Island?

The main inspirations for Rinth Island came from The Adventures of Lolo for the NES, which crafted amazingly challenging and varied puzzles from a limited set of blocks, and Tower Toppler (also called Nebulus) for the Commodore 64, which ingeniously wrapped 2D platforming gameplay around a tower, opening up a ton of interesting mechanics and situational possibilities. Inspiration also came from elements of Loader Larry for PC and Fire & Ice for the NES. 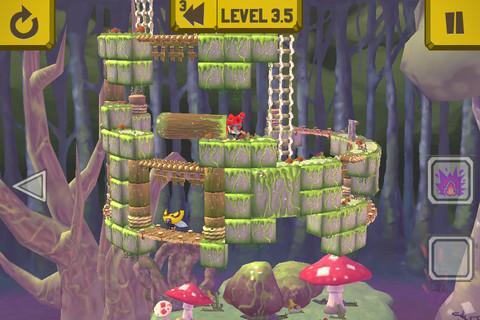 What really makes Rinth Island shine is that unique cylindrical level design. Tell us a little how that concept came to fruition.

If you think about it, a lot of 2D games are on a “cylinder” of sorts. The original Mario Bros. arcade game, for instance, let you walk off one side of the screen and come back on the other. We just took that “wrapping” and, well, actually wrapped it.

Early prototypes of Rinth Island were purely 2D, but after being inspired by games like Tower Toppler (a.k.a. Nebulus) and Lemmings Revolution, we started realizing the breadth of puzzle possibilities a cylindrical world could accommodate. Rolling boulders, controlling remote objects, and firing cannons is just tons more exciting with the extra “twist.”

We particularly enjoyed the cannon that fired across the stage in 3D space. What kind of crazy additions can we expect for the upcoming Upper Forest map?

Now that Rinth Island is finally out for iOS, what should we expect for the future of Buzz Monkey? We couldn’t help but be intrigued the “top secret game” notice on your site.

You can expect to see many more mobile and social games from Buzz Monkey.

Big Fish Games One Day Sale: buy one get one free