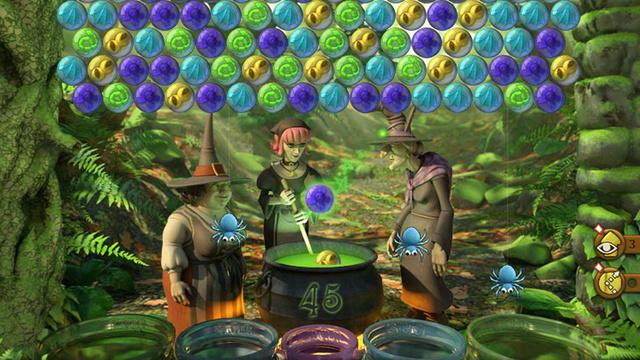 In the casual world, convenience is one of the most powerful tools in a developer’s arsenal. It can make or break the install base of a game, and a lack of it can inspire people to quit playing. After all, they can exit out and be playing something new in a matter of seconds. How does one prevent that? Offering a compelling cross-platform experience is one possible solution, and King.com has done just that by synchronizing the Facebook version of Bubble Witch Saga with the recently released iOS version.

I was provided a demonstration of the game from CMO Alex Dale, who walked me through the in-depth ways the two versions will work in tandem. Most interestingly, progress will be shared between them, enabling players to pick up on their iPhone or iPad where they left off on Facebook or vice versa. It’s something King.com feels has never been done quite so intricately, and I’m inclined to agree.

Secondly, items purchased in either version will show up in both, no doubt earning some goodwill from users who’d rather not be forced to double dip on power-ups. It also strengthen’s the company’s argument that the two games have the potential to be fully functioning appendages linked together by that nebulous entity we all call the cloud.

Or maybe I’m just getting a little too poetic here. Either way.

Last but not least (okay, so kind of least), both versions will share a single leaderboard, an addition that only works because of the mechanical similarities between the two. Seriously, there’s a lot of parity in action here. The mobile version is touch-based, and requires no more than one finger to control, but the overall feel is perfectly reminiscent of the Facebook version.

Because of the symbiotic relationship between the two, Dale doesn’t consider the mobile version to be a port. Rather, it’s simultaneously an accessory to the Facebook version and a chance for the company to bring in new players — who, potentially, will also choose to reap the benefits of cross-platform progress. But not everyone wants Facebook in their mobile games, and that’s why players will have the chance to opt out and just stick to the mobile version. Poor Facebook.

The new version of Bubble Witch Saga is the first of many similar motions for King.com, who intend to bring more of their Facebook games to mobile in the future. If all goes according to plan, those new games will feature the same synchronistic relationship with their social counterparts, which is something I think most of us can agree is a great direction for the company (and hopefully other companies) to head in.

And worry not, Android users: Bubble Witch Saga will be arriving on your platform sometime this year. I hear it will contain bubbles. And witches. And, spoiler alert, a saga of some sort.