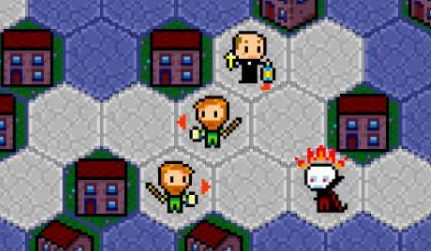 Earlier in the month, between March 8th and 16th to be exact, the Procedural Death Jam saw developers from all around the world come together with the common goal of producing games based around the Procedural Death Labrynth genre, formerly known as “roguelike-likes”. The two core rules involved with the game jam were that the game must feature procedural generation and permadeth. Over seventy games were produced and entered into the jam, and a handful of games walked away with awards.

Lamp and Vamp, developed by Globz, walked away from the jam with both Best Game and Best Art awards, and for good reason. Lamp and Vamp is an enjoyable strategy game where players must navigate a vampire to his coffin through a randomly generated neighborhood, while avoiding the local neighborhood watch, determined to catch them. Movement is based on a tile system, each turn the player can move to any adjacent tile, and the vampire hunters also move one tile. The catch is that the vampire hunters have torches and flashlights, and can see ahead. If the vampire is caught in the hunter’s line-of-sight, all the hunters in the neighborhood will converge and attempt to corner the vampire, resulting in death.

Luckily, being a vampire provides players a few tricks up their sleeves to use if they find themselves pursued. Turing into a bat allows players to traverse across tiles in large jumps, and turning into a ghost allows the player to move through solid objects like houses and trees. Using abilities consumes blood, which would be a problem if the player wasn’t a blood-sucking vampire. Approaching a vampire hunter from behind their line of sight allows the vampire to stun and drain the blood of that hunter.

My best score was 6 coffins and 9 people consumed. See if you can do better.

Would you play an Animal Crossing iOS companion app?