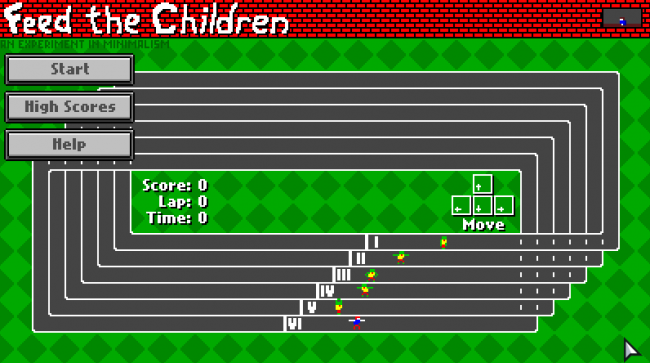 If you’re wondering, no, the game has nothing to do with saving up money to feed starving children. Feed The Children is, in fact, a comedic, top-down racing game where players must out-race impossibly fast runners. A few laps into the race, much like any frustratingly unbalanced situation, a gun is pulled out and now the player can race around the track, attempting to kill the other racers before one can compete all eight laps.

The whole situation is complicated when security guards, police, zombies, falling pianos, and other obstacles show up and get in the way. All throughout the ordeal, the text-based announcer narrates the situation with a good bit of tongue-in-cheek humor.

Players use the arrow keys to navigate the race track where they must tag the checkpoints before the timer expires. Oddly, the event organizers of the race are really picky about who they give the first place medal to, because simply killing the other racers does not guarantee you first place. When they say eight laps, they mean eight laps.

Feed the Children was developed by Daniel Bucci, and can be played on his official website. Or, if you prefer to not go blind, the game is also playable on Newgrounds.

Oh, and why the game is called Feed the Children?

“I wouldn’t go looking for too much logic in this game,” Bucci admits.

Gods Will Be Watching you, this June

Lumini – the most relaxing game you’ll play this week