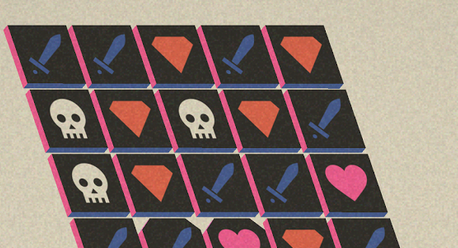 FAIF is a quick-and-easy game of chance where players select five adjacent tiles on a game board, and attempt to defeat their opponent. The trick to the game is that while five tiles are selected, the game decides which of the five tiles is triggered.

Each tile-type triggers something different. There are four tile types: heart, sword, gem, and skull. If a heart tile is chosen as the winner, the player receives one extra health point. Landing on a skull instantly removes one health point. Winning a gem tile awards the player gems in the amount of how many were selected in the group of five. If a sword tile is the winning tile, damage is done to the opponent equal to the amount of skulls in the group of five. So basically you cannot damage the opponent without taking a risk of being hit yourself.

Skulls can only do one damage at a time, so sometimes it makes sense to select a group of three skulls and two swords, and hope to land on a sword, in order to do 3 damage to the opponent.

Gems can be collected and used during a playthough in order to provide boosts for the player. However, the gems are only good for that one run. Once you lose, it’s back to zero.

FAIF is freely available on the web, and the developer, Beavl, has built a nice website around the game. Below the game is plenty of information regarding rules, and also information about the Android build (currently available for 99-cents).

Darkest Dungeon focuses on mental health over swords and sorcery