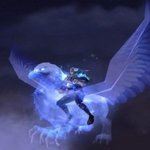 If you have a friend who gave up on World of Warcraft ages ago to indulge in frivolities like sunlight and fresh air, you ought to consider dragging him or her back to Azeroth. If you’re successful, Blizzard has some cool stuff for pal and for you that’ll make it totally worth your while.

World of Warcraft‘s Scroll of Resurrection typically gives incentives to returning players, and it also offers benefits to the player who handed out the scroll invite. Last night, Blizzard announced that the scroll is being retooled to offer better rewards for wayward sons and daughters, not to mention the people who bring them home.

Now, if you send out a scroll and your friend accepts, you’ll unlock either a free Spectral Gryphon mount (for an alliance character), or a free Spectral Wind Rider mount (“For the Horde!”). Your friend needs to play for at least 30 days before you can cash in on your new pet.

While free pet gryphons are cool, it’s the returning player who will really make out like a level 40 bandit with a +10 in charisma. He or she will receive:

Interested? Blizzard has some small print that you ought to read through first:

“Any active World of Warcraft non-trial player can send a Scroll of Resurrection. To be eligible to receive a Scroll of Resurrection, your friend must have previously purchased at least one month of game time at any point in the past, and your friend’s account must have been inactive since March 4, 2012 or earlier. A few other prerequisites apply — such as a free upgrade to a Battle.net account for players who haven’t played since 2009 or earlier — so be sure to check out the FAQ for full eligibility details.”

The French plan an invasion of their own with Le Game

Unreal Engine, coming soon to a browser near you