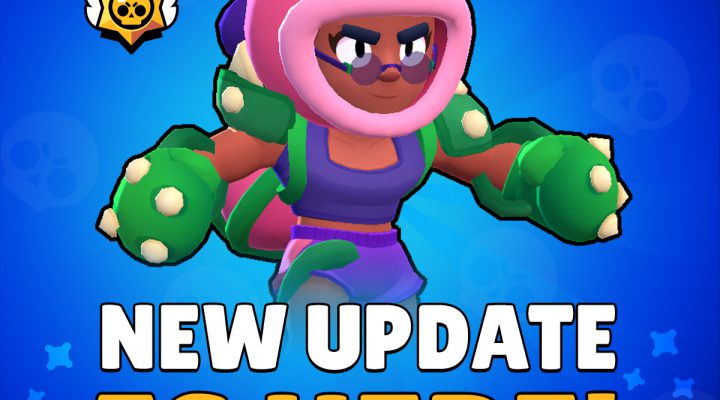 It’s fair to say we all love a good update, there’s something about new content that gets us feeling warm and fuzzy on the inside. Maybe that’s just me, but it doesn’t matter how you feel about updates, the latest one from Supercell is a real head-turner.

Although she is not officially on our screens yet, a new brawler has been revealed. Her primary attack is similar to El Primo’s, a close-range flurry of punches capable of landing multiple hits in the same attack. Her attack cone is wider than El Primo’s, meaning you will have slightly more range.

Her super is a shield which reduces all the damage she takes for a short period. In modes like Brawl Ball, this super is a game changer as you can shield yourself and then dribble with the ball. It’s not clear how much consideration Supercell have given to balancing, but they are normally quick to respond if they get things wrong.

Her Star Power is sure to raise a few eyebrows, it involves healing while in bushes. A lot of players use bushes to heal up anyway, but in showdowns which are bushy, Rosa is a deadly foe.

There is not much to say about the new skins, besides when they will be available for purchase. It’s likely that one of the skins will be available when Rosa is introduced in a couple of week’s time. Then the other skin won’t be far behind.

The new skins are:

They have introduced a lot of buffing and patching in the latest Brawl Stars update. 10 characters have had their health or attacks changed. Some of these changes are bug fixes specifically, Gene who’s super has caused a lot of problems recently.

Other important changes are listed below:

The most complained feature in Brawl Stars is the teaming up of players in solo showdown. Teaming is where the same or similar characters work together to eliminate the rest of the competition.

Supercell’s first attempt at fixing this problem involves having meteors target groups of players. They have also decreased the chance of energy drinks or mushrooms spawning near groups of players. This may not fix teaming right way, but it shows that actions are being taken to stop these players.

They have introduced a few new maps into circulation as part of this update. The new Gem grab map features a new dynamic map element to spice things up. Mine-carts will now travel across the map, doing damage to players on the tracks and blocking projectiles. The carts also push players away, so keep your eyes peeled for this new map.

Construction Simulator 3 Sets Up Shop In Europe With New Vehicles

Take Charge Of A World At War In Clash of Clans-like World on Fire, Out Right Now