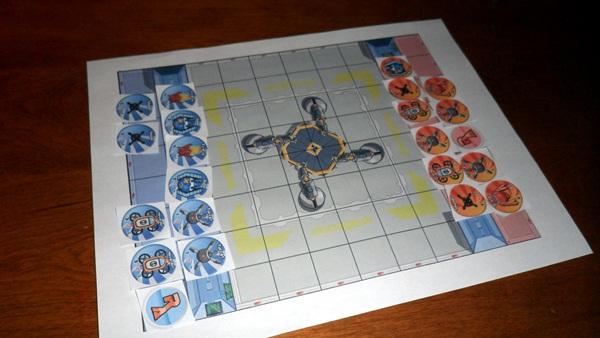 Bravado Waffle is certainly a company that has no problem living up to the first half of their name. After securing enough in Kickstarter funds to produce their first iOS game RoboArena, the company has already launched another Kickstarter campaign to raise funds for their second potential endeavour. The project? A board game adaptation of their upcoming Kickstarter-funded iOS game.

To those unfamiliar with RoboArena, the notion of committing to two different projects before the first one is even out of the gate may seem like a crazy idea – but unlike most new iOS games, RoboArena is a game that is already developing some strong support for the board gaming community. In fact the game itself takes a good deal of inspiration from RoboRally, a popular board game about robots racing through a warehouse.

The fine folks at Bravado Waffle were kind enough to send us a preview of the board game in print’n’play format (which goes a long way to explain the lazily cut-out playing pieces and shoddy printing you see in the images below – all entirely my fault, not Bravado Waffle’s). Much to our surprise, the board game isn’t simply a straight adaptation of the iOS formula. Rather, RoboArena: The Board Game plays a little bit like chess meets capture the flag… with robots.

Players will assemble an army of robots of their choosing (each robot costs X number of points, and a team can’t exceed 80), and will then take turns placing these robots, as well as their flag, on the board. Once they’re all placed, players will select one robot per turn to control. Each robot has a certain number of action points that they can spend to move and attack, as well as an attack range and a defense rating. If you’re within range to attack, you’ll need to roll a single die to engage in combat. If your roll has a higher number than your targets defense rating, you blow them off the board. This continues back and forth until somebody captures the opposing team’s flag, or if they simply wipe the opposing player’s entire robot army off the map.

In addition to three included maps – each with their own structures for robots to hide behind – the demo version we were sent included a customizable map with towers and pits that we could place anywhere we liked. The pits were an especially nice touch as they blocked movement, but still allowed robots with enough range to fire across them.

My wife and I played a few rounds last night, both on the pre-made maps and the do-it-yourself board, and we definitely had a good time. It’s a very light experience – rounds don’t seem to last more than 10 or 15 minutes, and the gameplay is so straightforward that anyone can learn it in seconds – but thanks to the differing map layouts and point/attack/defense values, there seems to be enough strategy here that two skilled players could really enjoy testing each other’s mettle. From what we’ve seen, the iOS version definitely looks like it’ll be a meatier experience – but as a nice light gaming snack, RoboArena: The Board Game could definitely find a comfy spot in any gamers’ collection. 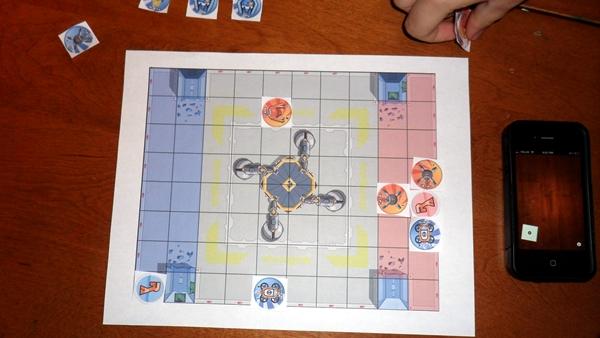 It’s worth noting that Bravado Waffle isn’t alone in the field of iOS-to-board game translations. Trouble Brothers, the developers behind the upcoming Cargo Runners, are aiming to have a print version of their game available early next year. Angry Birds just saw their Knock On Wood tabletop game arrive in stores this month courtesy of Mattel, and Plants vs Zombies will even be getting a board game translation in 2012 courtesy of Scene It? creator Screen Life.

Interested in seeing RoboArena: The Board Game get made? Click here to check out the related Kickstarter page.

PlayFirst Games on Sale at Big Fish and more!