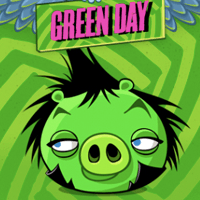 People like to give Rovio a lot of flack for “milking” the Angry Birds franchise with things like theme parks or, you know, $400M in plush toy sales. In truth, however, I see them as a very Disney-like entity: prolonging the value of their work by making smart moves to grow a lasting brand. Whatever you feel, though, there’s no denying their latest promotional announcement rocks… literally.

Speaking on behalf of Rovio, chief marketing manager and resident Mighty Eagle Peter Vesterbacka explained the fit as a natural one between “two big green brands” whose fan bases would benefit from exposure to one another.

“For us, it’s bringing Angry Birds to more people, and it’s the same thing for Green Day, bringing their music to a new audience.” Visitors to the above landing age are encouraged to become fans of both Angry Birds and Green Day on Facebook, to preorder the band’s new album Uno, and to download the game online.

And while the company hasn’t confirmed the level pack’s appearance on iOS or Android yet, Vesterbacka promises that this is the “first step in a much bigger co-operation,” which will include Green Day’s upcoming series of albums Dos and Tres. Over saturation? Hardly, argues Vesterbacka.

“People often think I’m joking when I say we’re only getting started, but that’s still our perspective.” In fact, if you look at the company’s recent moves on behalf of their superstar franchise, it’s only this year that major global brand partnerships have really started to firm up, with the announcement of Angry Birds Space alongside NASA, and the promotion of their in-game characters at Philadelphia Eagles games. Add this move to the list, and Angry Birds as a franchise really starts to emerge as a palette – like Disney parks, like The Simpsons – for celebrity personas, pop culture mainstays, and big corporations. And emerge it will.

“We have some pretty interesting other things in the pipeline for this year,” hints Vesterbacka; “and we’re slowly getting to where we ought to be: making Angry Birds a pop culture phenomenon.”