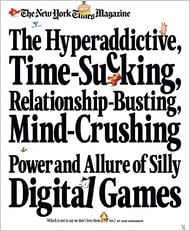 The New York Times created a web game to accompany their article about casual games that’s very clever and fun to play. Basically, with your arrow keys to move and your “enter” button to shoot, you can shoot up and destroy every word and graphic on the web page. It’s really cool.

And it’s a good thing as well, since this is probably the most long-winded article about games I have ever attempted to read.

Amidst the insulting reference to casual games as “stupid games,” the obligatory whining about Zynga, and shout-out to Jane McGonigal, there is an interesting expose about Zach Gage, an New York based indie game developer who experiments with casual game genres, including the word/strategy game SpellTower (which we gave 4 stars to). Gage also shares an interesting tidbit about his puzzle game Unify. It didn’t sell well, but when he changed it to Unify Birds and added cute little birds as objects, it got a better reception.

I would share more about the article, but honestly, the fact I’m not a fan of the article is not the gist of this post.

What’s cool here is this embedded web game, which lets you blow this stupid article up. Now, that’s addictive.

Jane Jensen is coming back to adventure games [interview]