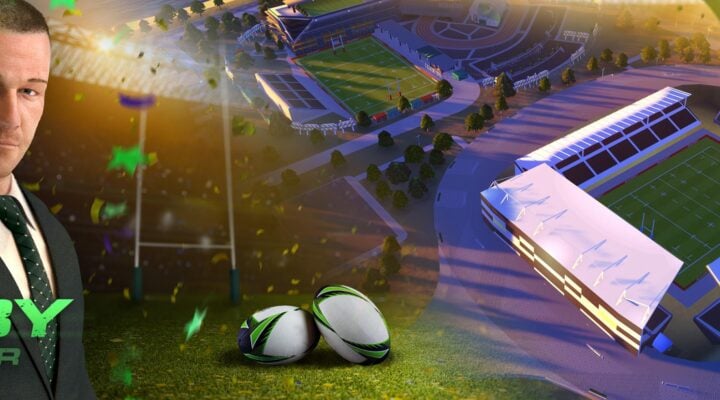 The first of many planned titles on the Blackout Games sports management simulation platform, Blackout Rugby is being touted as “the most in-depth rugby team management sim ever made”.

Blackout Rugby sees you building a club, training a team, and competing on the world stage.

Naturally, you don’t have to get directly involved in all that messy, bruise-inducing business on the pitch. Instead, matches play out automatically via a revolutionary match engine.

You can watch each game in full 3D, as if you’re standing right there on the sideline. Even more impressively, each player has their own unique avatar, as well as their own individual attributes and skills.

But it’s not all spectacle. You’re a manager, and so naturally you can adapt your tactics between games through training and orders.

Plus, there are player injuries to juggle, contract negotiations to thrash out, sponsors to appease, players to buy and sell, facilities to upgrade, a youth academy to operate, competitors to spy on, and much, much more.

The level of managerial detail is immense.

Not only will you need to run training sessions, but you’ll have to target specific skills to get the best out of your team. There are more than 20 different session types on offer, and you can tweak metrics like ruck commitment, lineout target, and so on.

You can even build statues of former players to boost your team’s morale and keep the fans happy.

Blackout Rugby is an MMO, too. That means you’ll be going head to head with countless other rugby aficionados, as well as creating clans with your friends through the Union system.

Blackout Games appears to have thrown everything into Blackout Rugby. You can find out for yourself by downloading it on the App Store, the Google Play Store, or Steam.