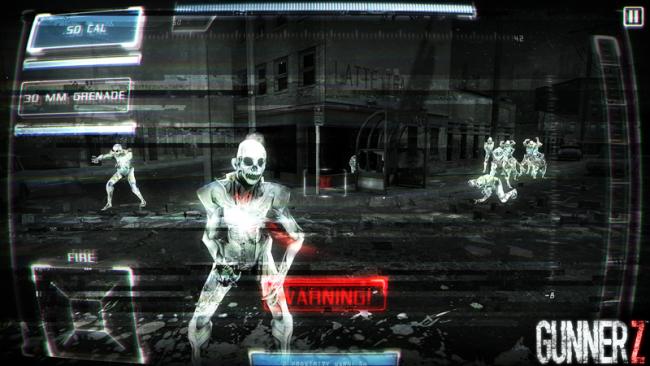 Forget everything you thought you once knew about BitMonster, because things just got real: and I’m talking apocalyptically real. The developer has announced their next game today, a fast-paced zombie-themed shooting title called Gunner Z, and while the project is the complete polar opposite of the studio’s fun-loving Lili, sometimes change can be an incredibly awesome thing to behold.

BitMonster has described the game as “night-vision turret combat with realistic modern vehicle weaponry on steroids,” and after a sentence like that, I don’t think there’s really anything else I could tell you to convey just how awesome this one looks. The debut gameplay trailer is one of the most exhilarating things I’ve seen in quite some time, with the night-vision component making the zombies in Gunner Z ten times scarier than most zombies you’ve probably seen: their nearly translucent bodies glowing a ghostly white, and the player getting an uncomfortable glimpse into their insides.

In the game, players will start out by creating and modifying a number of war trucks codenamed “AC-HMVs,” which come equipped with a giant moveable crane arm that is capable of holstering all sorts of the world’s most devastating weapons. Armed with your vehicle, you’ll be able to have full reign of the game world, as you demolish buildings, spread fires, and take out every last one of those swarming undead. However, the catch is that these zombies actually know a thing or two about strategic military tactics: mostly because they’re being controlled by a powerful enemy military who wants to use the hoard of undead as a biological war tool!

The incredibly dark and skeletal world of Gunner Z is a stark departure from the sunny point-and-click environments we saw in last year’s Lili, but the unequivocal beauty in the visuals is still ever intact: perhaps even more so now than ever. You can expect to see Gunner Z roll its terrifying, zombie-hunting guns onto the App Store sometime soon.

Is Halfbrick teasing a new game?