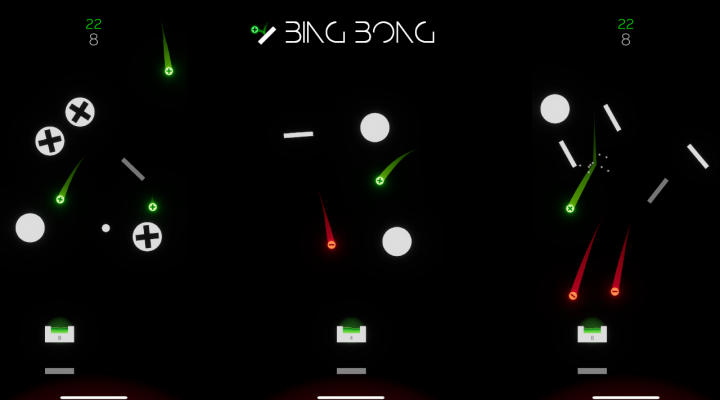 One of the first games to appear in arcades and living rooms involved bouncing a ball off a moveable paddle. As Bing Bong! shows, you just can’t keep a good idea down.

In fact, there have been countless variations on the Breakout theme over the years, including a veritable explosion of them following the arrival of touchscreen smartphones. Bing Bong!, from indie developer Sasank Sasikumar, is the latest. And it looks like a cracker.

This is thanks to a few ingenious twists on the formula. While many ball and paddle games involve destroying bricks, following the Breakout blueprint, Bing Bong! Injects a healthy dose of pinball into proceedings.

There are green balls and red balls. They fall in from the top of the screen and ricochet off various obstacles that appear at random, making them disappear. These include wall-like lines, circles of various sizes, and other circles with either a plus or a minus on them.

You do the math

If a ball comes into contact with a plus, it grows larger. If it hits a minus – well, you get the idea. The aim is to deflect green balls and avoid red ones.

And that’s the concept in a nutshell. But these simple elements combine to create a chaotic gameplay experience that sees you frantically keeping track of multiple balls as they collide, bounce, shrink, grow, and generally defy the natural order before plummeting towards the bottom of the screen.

It’s makes for an accessible but thrilling premise, set off by some lean and stylish visuals. Bing Bong! is one of those casual games that you can vanish into for hours, hypnotized by its addictive gameplay and soothing plinky plonky audio.