Companies buying other companies. It’s the way the world works, and it’s a big part of the games industry. This year saw a number of huge acquisitions in the games space; huge not just in terms of how much money changed hands, but also in terms of how surprising some of the announcements were and what kind of impact they might have going forward. Here are the five biggest of 2011.

Like most big game publishers, Ubisoft wants a piece of the mobile pie. Even still, the acquisition of RedLynx, the studio behind the excellent iOS racing game DrawRace 2, seemed to come out of nowhere. RedLynx has also created a number of other, non-mobile hits as well, including the Xbox Live Arcade classic Trials HD, and it’s this expertise in digital games that attracted Ubisoft.

We don’t know what RedLynx will be working on now that it’s under the Ubi umbrella, but it sounds like the studio will continue its focus on developing for a range of platforms.

“The reality of today’s market is not about platforms,” RedLynx CEO Tero Virtala said after the announcement, “it’s about creating excellent gaming experiences that consumers can play on any device or screen they like.”

OpenFeint was doing pretty good on its own with more than 75 million users across its mobile social gaming network, which spanned both iOS and Android. But it should get even bigger now that it’s a part of GREE, the Japanese mobile giant that purchased OpenFeint back in April for $104 million. Now the two companies are using their combined, international experience in freemium and social mobile games to launch a brand new network sometime next year. And their plan is quite ambitious.

“The new platform will leverage OpenFeint and GREE assets and will bring together Western and Asian mobile social markets with a goal of reaching over one billion users,” GREE CEO Naoki Aoyagi said when the new network was initially announced.

#3 – EA gets big into causal with Popcap acquisition 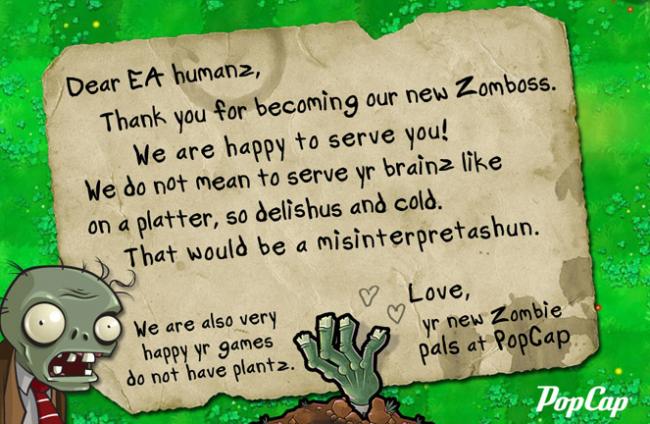 Popcap is one of the most consistently great developers around, and is responsible for some of the biggest casual game franchises in existence, including Bejeweled, Zuma, and Plants vs Zombies. So it makes sense that Electronic Arts wanted a piece. And the publishing giant was willing to pay for it, too, acquiring Popcap this summer in a deal that could be worth upwards of $1.3 billion.

The deal not only gives EA a large library of hit brands, but also shot the company straight to the top of the social games charts thanks to Pocap’s Facebook hits Bejeweled Blitz and Zuma Blitz.

With the rise of platforms like Facebook and the iPhone, many traditional PC developers are having a tough time. So when you can’t beat ’em, join ’em. This August, Digital Chocolate, the social developer behind games like Galaxy Life and Zombie Lane, acquired Sandlot Games, one of the best-known developers in the casual space.

Since the acquisition, Sandlot has stopped selling downloadable games from its site as it transitions to working on social games. And whatever the studio is working on now remains a mystery.

#1 – Zynga tries, and fails, to add Popcap and Rovio to its team

The biggest acquisitions of the year turned out to be the ones that didn’t happen.

It’s no secret that Zynga likes to acquire existing game studios. In fact, this year it seemed like the Zynga family was growing on a monthly basis. But for all of its money and clout, it couldn’t pull the trigger on two major deals. It lost a bidding war with EA to purchase Popcap (despite reportedly offering $1 billion) and later reports surfaced that Angry Birds developer Rovio also turned Zynga down.

According to reports, the reason for both was due to Zynga’s corporate culture, which forces employees to work hard, long hours developing games. Maybe that’s how Zynga managed to launch four games in November alone (Dream Zoo, CityVille Holidaytown, CastleVille, and Mafia Wars: Shakedown). But imagine if you added a game like Angry Birds or Plants vs Zombies to Zynga’s already impressive line-up of hits? It wouldn’t get much bigger than that.