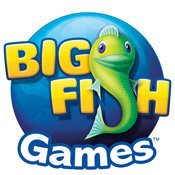 In the Downloads space, Big Fish Games is a big player. So, it’s sort of big news when they test out a new logo unless the change to the logo is minute many will not notice it.

What does this mean? Is Big Fish saying that they don’t want to imply that they are the King of the World as Leonardo DiCaprio would scream from the deck of the Titanic? Does their marketing department have too much time on their hands? Or, is this just a nice change to make their logo more simple and easier to view on various devices such as the iPhone or iPad?

My vote is the answer behind Door #3. The new logo is a slight change but will render quite on any device or screen resolution because there is less background detail. But what do you think? Comment below.