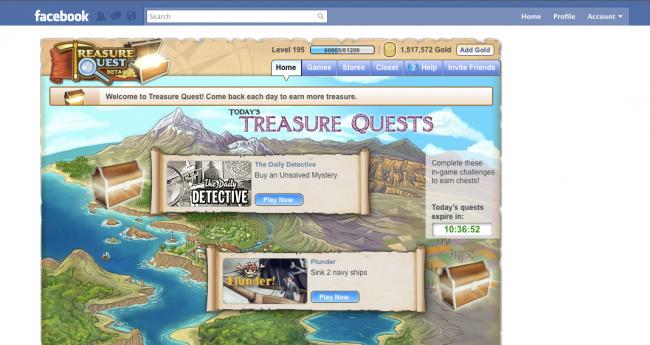 Big Fish Games just released Treasure Quest which can best be described as a casual games portal built for the social platform.

Players can play a variety of free games for free based on the most popular genres, such as hidden object, brain/logic, match-3 puzzle, strategy, card, and riddle games. As you play, you level up and earn gold that you can use to unlock new games content and access new power ups.

The full list of casual games to play at launch are below:

For those familiar with the online games channel on Big Fish Games, some of these games (e.g., Unwell Mel, Fairway Solitaire, etc) will sound very familiar. There are other games on this list, especially the hidden object games, which offer a new twist.

Big Fish is releasing quests daily for players to acquire new gold. Users will also be able to purchase gold to level up faster and can share their Treasure Quest accomplishments with friends.