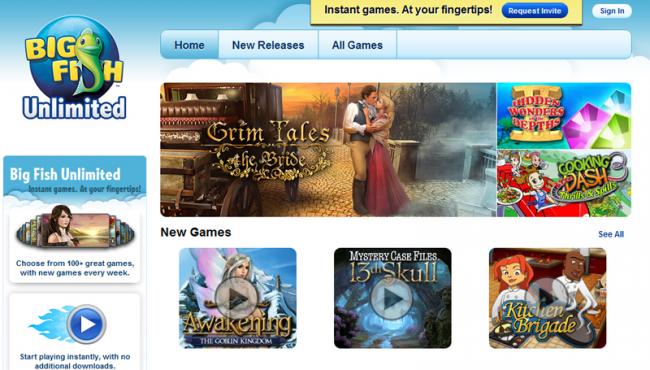 Big Fish is leaping into cloud gaming with Big Fish Unlimited, announced CEO Paul Thelen. Launching today with 100 games from 42 developers (and more on the way), the service will enable subscribers to seamlessly play games on their PC, television via Roku, and mobile devices.

The reveal was made during Thelen’s keynote, and he brought out Will O’Brien, VP and General Manager of Big Fish Unlimited, to show the audience how exactly the service works.

O’Brien began by breaking down what Big Fish sees as the three key benefits of the service: Unlimited access to a growing amount of games, instant access to said games, and cross-platform play. Which, if you think about it, are by and large the core tenets of the argument for cloud gaming.

To demonstrate, O’Brien loaded up the Big Fish Unlimited website and launched Grim Tales: The Bride. It booted up without a hitch, and he was quick to point out that it was a 732 MB game. It’s an important detail, because it shows the ease with which users can play bigger games without having to go through the hoops of installing and hoping their computer can run it.

O’Brien exited the game after a few minutes and fired it up on a tablet. After hitting play on the menu, it immediately returned to where it left off on the PC. A round of applause followed shortly after.

After the demonstration, the discussion moved on to the elephant in the room: pricing. The monthly fee for the service is $7.99, and it includes full screen gameplay, no ads, and an ever-growing list of games to choose from. There’s also a free-to-play version, featuring 20 games, game play in a smaller window, and ads. At the least, it seems like a great way to test out the service before deciding if you want to buy.

Nearing the end of the announcement it was pointed out that a group of select customers who previewed Unlimited were not able to discern when the game they were playing was running natively or when it was streaming. There will likely be some issues for users with slower connections, but all in all it looks like Big Fish has put together a very competent cloud gaming network.

A dozen years of development: Miniclip’s drive to maintain a quality website [interview]