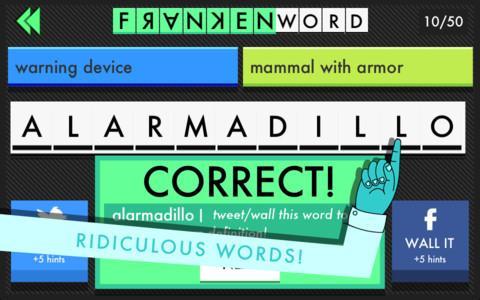 Playing a word game is kind of like writing: being good requires either a decent vocabulary or a mastery of the thesaurus. As such, writing about word games is kind of nerve-wracking. I feel like everything I type here is going to be heavily scrutinized, which makes me want to pull out all the ten dollar words I can think of. Rapscallion. Diphthong.

Are you impressed? I certainly hope so. But if you aren’t, this list of 2012’s best word games should do the trick. It’s been an excellent year for the genre, and an even better one for our brains. Seriously, if you spend enough time with a good word game, you’re bound to learn a new word or two. For instance, did you know that “za” is slang for “pizza”? It totally is! Try it in Words With Friends, and then laugh heartily when your friends tell you how cheap you are.

Developed by Mary Shelley, Frankenword is a game where you try and create a scary-but-kindhearted monster out of words.

Okay, so I made all of that up. It’s actually a game where you combine words to form new, ridiculous ones. Say you’re presented with the hints “hot and humid” and “preserved cucumber.” The appropriate answers for each of these would be “tropic” and “pickle” which, when combined, form “tropickle.” Another example—and one I’m particularly fond of—is the merging of the words “provolone” and “lonely.” I’m pretty sure you can figure that one out for yourself. 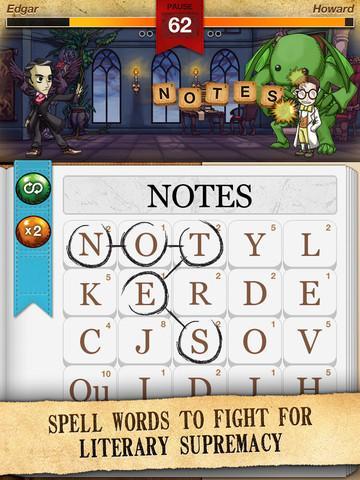 A great vocabulary will only get you so far in Writer Rumble. If you really want to succeed, you need to learn how to think on your feet. It’s an incredibly fast-paced game, presenting players with a tiny grid of letters and challenging them to find words on it as quickly as they can. For each word found, a volley of letters gets thrown at the other player, causing their HP to drop. This madness continues until someone dies.

Writer Rumble‘s speedy rounds make it an excellent on-the-go game, but its addictive gameplay also makes it the kind of game you could happily play at home for an hour straight (I say this from experience). I recommend playing it on an iPad if you have the means (the letter grid is pretty small on the iPhone), but that’s far from necessary to enjoy it. 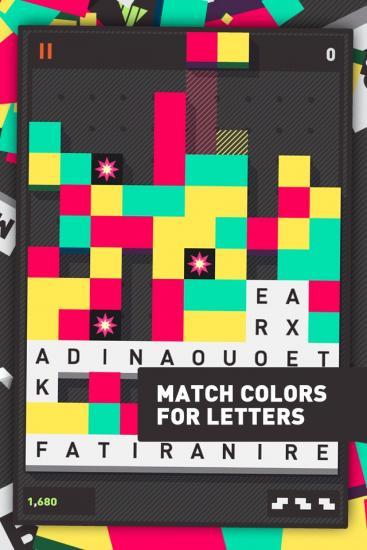 Puzzlejuice takes the tile-matching gameplay of Tetris and suffuses it with a clever, wordy twist. When you form a line of tiles at the bottom of the screen, they turn into letters. In order to clear them, you have to move the letters around and form words. It’s an incredibly unique synthesis of two genres, and the end result is one of the most captivating games you’ll play this year.

We’re a little saddened by the lack of juice, though. Talk about false advertising. 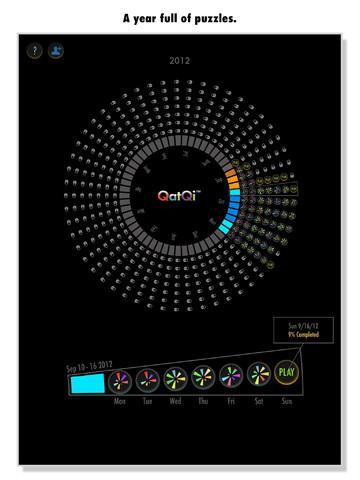 It may be a grid-based word game at heart, but there’s a whole lot of complexity to be found in QatQi (pronounced “cat key“). You take on the role of a lexicological spelunker, forming words on a labyrinthine grid as a means of progressing further on the map. You’re basically Indiana Jones, only your success is dependent upon your vocabulary rather than your bravery. 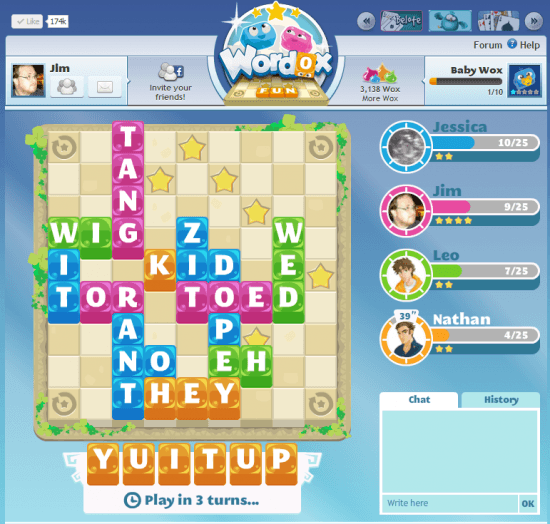 Wordox is a game about domination. The goal in each round is to be the first player to control 25 letters on the 9×9 playing field and, straightforward as that may sound, there are some pretty clever intricacies to the gameplay. For starters, all players must work from a shared pool of letters. Additionally, opponents can steal from you by adding letters onto your words.

Even if you don’t consider yourself a competitive person, you’ll be fighting tooth and nail to win in this addictive word game. 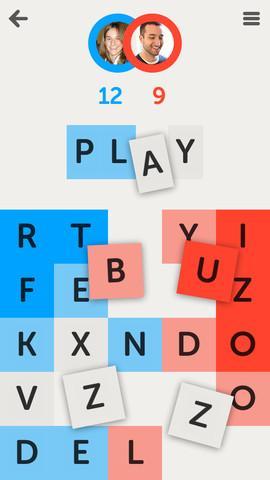 It may not look it, but Letterpress is one intense game. You and an opponent take turns seeking out words on a grid covered in letters, the goal being to have the most territory claimed by the end of the match. Were that not challenging enough, your opponent has the ability to steal tiles from you over the course of the match. No matter how far ahead you may be at any given point, it’s all too possible the other player will loosen the grip on your letters and claim them as their own.

All’s fair in love and word games, after all.

Replay Wednesdays: Waking Mars, The Journey Down and more!