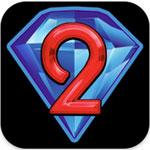 More than seven months ago, players of Facebook’s popular Bejeweled Blitz received a game-changing update that introduced coins and boosts. When the PC download was released a few months later, the availability of boosts and coins began to spread. It seemed as though every version of the game was destined to receive these features except the iPhone. Now, thanks to the latest update from PopCap Games, that’s no longer the case.

Version 1.3 of the popular portable game brings the long-awaited update adding boosts and coins that most of us thought would never come. For those not yet familiar with these additions, coins are new gems that occupy the playfield. When matched, they increase your new in-game bank. In turn these coins can be spent on new boosts that allow you to do things like add time to the clock or detonate all special gems at once. For a complete breakdown, be sure to check out our article from when the update first hit Facebook back in January.

Like everything else in the portable version of Blitz, your coins will sync up with your Facebook and PC download versions of the game, meaning no matter where you earn them, you can spend your coins on the platform of your choosing.

Players who log into version 1.3 for the first time will be rewarded with a 50,000 coin bonus, as well as the smug knowledge that they’re finally keeping up with the rest of the Blitz family.