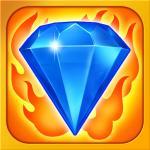 To celebrate the start of 2014 and the last remaining winter months, the mobile version of Bejeweled Blitz has dished out a brand new Rare Gem title update today, which adds in – you guessed it – Vaulted Rare Gems! A fan-favorite feature from the Facebook iteration of the game, the Vaulted Rare Gems allow players to swap their Bejeweled Blitz gems with a number of explosive new effects on the game board.

While each of the newly implemented Vaulted Rare Gems is only available for a limited time, players will also be able to unleash the power of another rare winter gem: the Ice-Burrrst Gem! All Vaulted Rare Gems can also be shared directly as gifts within a player’s Items tab, and everyone who uses their Daily Spin for 5 Days in a row will be rewarded with a shiny Blazing Steed Rare Gem delivered right into their items.

The free Rare Gem title update is now live in both iOS and Android versions of Bejeweled Blitz, and you can also check out the new Ice-Burrrst Rare Gem in action by watching the accompanying trailer that’s embedded in this page!