Home / News / Behind the Game: The Tales of Bingwood: To Save a Princess

Behind the Game: The Tales of Bingwood: To Save a Princess 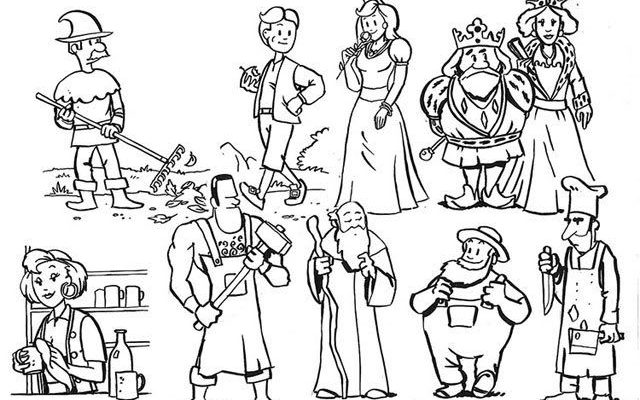 When Markus Tuppurainen finished playing Monkey Island 2 back in the 1990s, he suddenly found himself with nothing to satisfy his adventure game cravings. So he decided to design an adventure game himself. A whopping fifteen years in the making, The Tales of Bingwood: To Save a Princess – the first chapter in a planned trilogy – is an homage to classic adventure games of the 80s and 90s. We chatted with Markus about the making of To Save a Princess and made him reassure us that we wouldn’t have to wait another 15 years for the sequel.

Hi Markus, thanks for taking the time to speak with us. Why don’t you start by telling us about who you are and what you do at BugFactory.

My name is Markus Tuppurainen, and I am a cofounder of BugFactory, which was set up in 2008 as a venue for developing and distributing hobby game projects. The team consists mainly of two members: personally I’m mostly involved with design and art related tasks whereas Carl Granberg has taken on himself to tackle the programming side of things.

According to your website, The Tales of Bingwood was first conceived back in the early 1990s. That’s a long time ago! Can you fill us in on how the project got started, and why it took so long to complete?

The idea for the project was indeed conceived back in the 1990s. I had just finished playing through Monkey Island 2, and I couldn’t come to terms with the fact that the game was really over. Back then there were no walkthroughs readily available, and the completion had literally taken weeks. As the game was finished, there was nothing left to satiate the emerged Threepwood addiction.

I concluded that in order to have more of the same, I’d have to make it by myself! 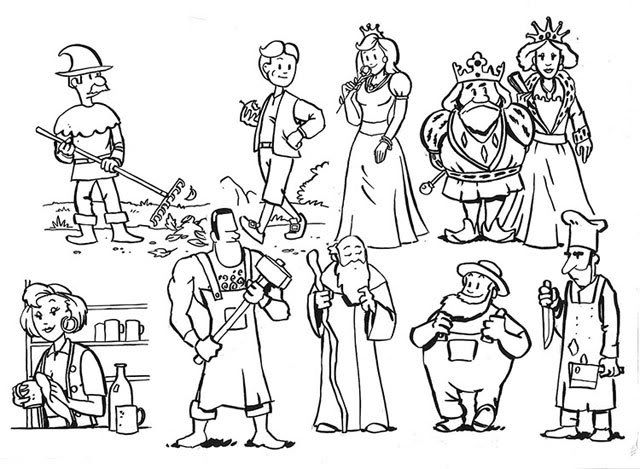 Concept art: The townspeople of Bingwood (click image to enlarge)

The biggest challenge in getting the project started 15 years ago was finding a programmer. In the barbarous time of landlines and BBSs we were finally lucky enough to find a skilled programmer, involved in the Amiga demo scene, living just one street away from us. He soon set to work and not long later we witnessed the hero walking and zooming in the first two linked scenes. This was as far as the project went at that first time.

Around the change of the millennium, another programmer came up with an idea of making the game playable on web browsers. We soon had the hero walking and zooming in a few linked scenes before the project was shelved again for a few more years.

As the project was picked up again in 2007, I already had several years of experience working in various positions in various game companies. The firsthand experience in making games really made a difference. This time, with Carl aboard, the project moved on with a surprising speed and was finally finished in 2008.

Bingwood is heavily influenced by all of the early adventure games, but especially so with the first two Monkey Island games. Ever since the conception of the idea, I wanted to capture the same humoristic overtone and the overall sense of fantastic. 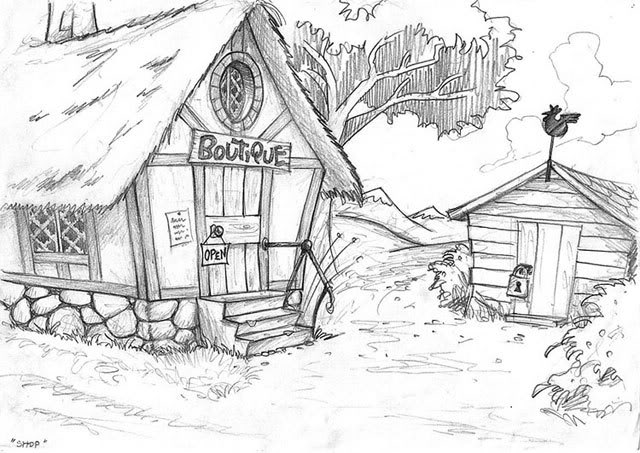 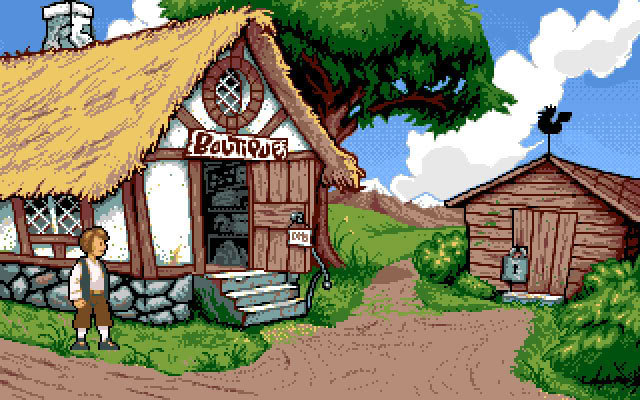 The main character Tom has many similarities with Guybrush, but I didn’t strive to make him a direct carbon copy. Tom is a poor fisherman, like all his ancestors before him… or was, until he developed an allergy to fish! This is the setting in which, while searching for himself and his new purpose in life, Tom is graciously volunteered by the villagers to save a Damsel in distress.

Tom’s last name "Driftwood" was decided on very late in the project. Not only did it suit the family with long line of fishermen, but it also served as a conscious homage to Guybrush.

Tell us about the game’s distinctive "retro" graphics. Why did you decide to go with this style? Do you think retro graphics will make a comeback in game design? (What’s old is new again…)

For people who have played games since the 90s, the pixel graphics have never really "gone away". The internet is full of games paying homage to the visual look of the early videogames. There are whole forums dedicated to the art of hand pixeling. Pixels tend to have a certain affectionate chokehold over those who grew up with old games, whereas the very same "blocky graphics" may come as a shock to the gamers who’ve picked up the habit more recently.

As far as Bingwood is concerned, the graphics were made
in sporadic bursts throughout the last 1½ decades in the original
320×240 resolution. As the final effort to get the game began, we never
seriously considered updating the graphics to the "modern standards".
It just wouldn’t have been the same game anymore.

I do believe everyone who can see past the "blocks" will enjoy the game! 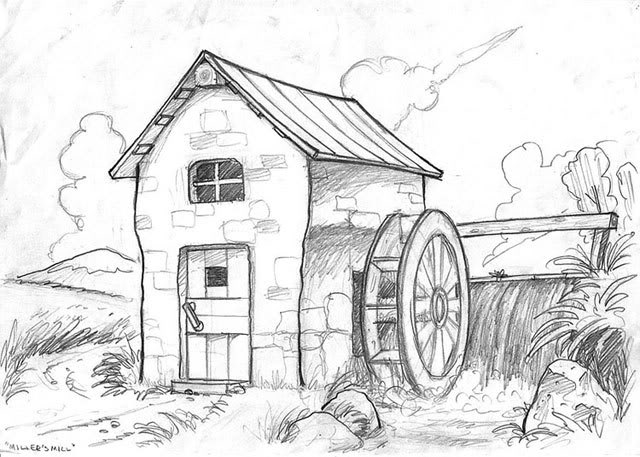 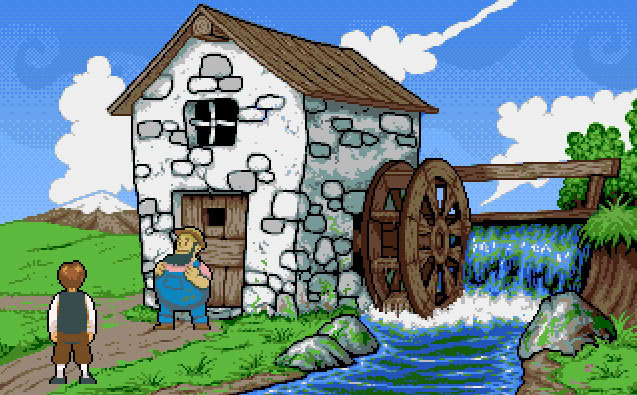 You’ve said that having used voice actors for The Tales of Bingwood, you would never go back to having a "silent’" game ever again. Why not? What "special something" do voice actors bring to a game?

I think the audio makes up 50% of the whole gameplay experience. Who’d want to watch their favorite TV show muted with subtitles? Having the characters professionally voiced can add a lot of personality to them. We were lucky to find Casey Mongillo, whose voice was exactly what I had wanted Tom to sound like. Anthony Reece (from voicetoons.com) took it on himself to voice over 20 different characters, which is a feat in itself! Anthony was also responsible for involving Lani Minella in the project. She has been doing voices for hundreds of games and is somewhat of a legend in the business.

The decision about including voice overs in the game was relatively easy to make. I’m sure even the early adventures would’ve included them had the technology allowed it back then. 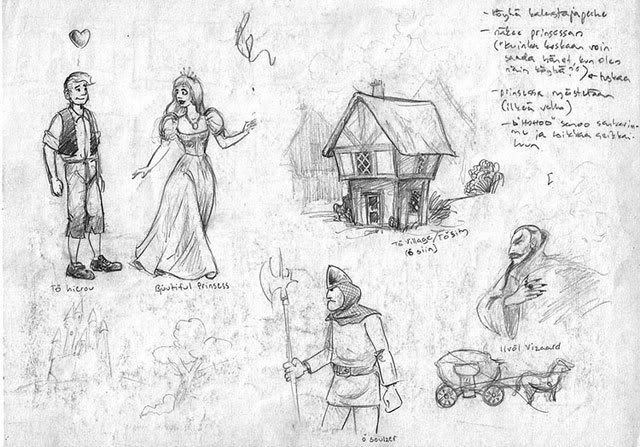 The Tales of Bingwood concept art (click to enlarge)

Tell us about Adventures Without Effort (AWE), the software editor that you created from the ground up to make The Tales of Bingwood, and its successor, AWE 2.

AWE works as a comprehensive resource database for all the images, sounds effects, music files, voice lines etc used in the game. It allows for the designer to place the resources into the scenes and assign scripts (written in a scripting language of our own design) to them. The scenes can finally be previewed with a push of a button. When the game is finished, AWE also packages the game into a binary file.

As the game progressed, we continuously came up with some new features that needed to be added into the original editor framework. Towards the end of the project there were so many additions that in order to implement them neatly, it would’ve been necessary to remake the editor from scratch.

So, that’s exactly what we ended up doing. The second generation editor (that goes by the working title "Awesome") is currently in the works, and once completed, it will blow the first one away!

What about The Tales of Bingwood are you most proud of?

It’s difficult to pinpoint a particular thing in the game… However, having completed an independent project is an achievement in itself to be proud of! The net forums are full of game projects that in the end will never see the daylight… 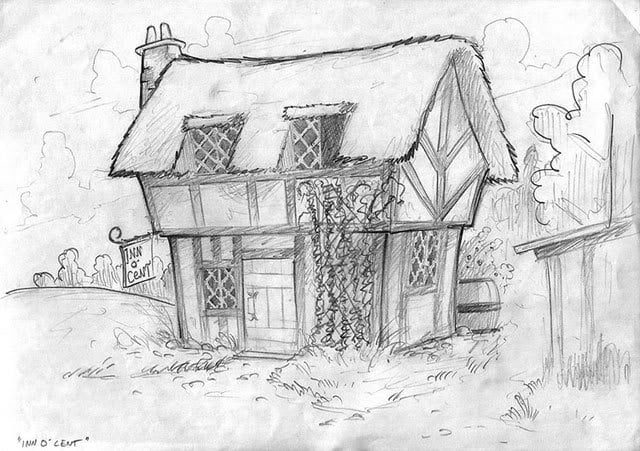 The Bingwood Inn: Concept art (top) and final version (below) 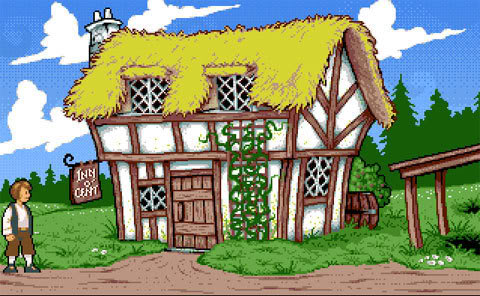 Can you give us any hints about the sequel, The Tales of Bingwood: The Shady Forest? (And maybe reassure fans that they won’t have to wait another 15 years for the sequel!)

The Tales of Bingwood Chapter II: The Shady Forest is currently in the works, and we do indeed hope that it will take less than 15 years to finish! The series continues to be developed on whatever free time we have (a rare commodity sometimes), and our best estimate of the release is in 2010.

The current story arc is planned as a trilogy. Naturally, if people like the game and it sells like crazy, nothing is preventing us from continuing the series beyond that. There is still plenty to explore in the neighboring kingdoms.

50% off all games on PlayFirst!