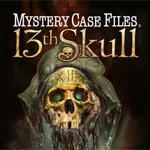 Gamezebo recently sat down with Adrian Woods, game developer at Big Fish Games Studios, to chat about the making of Mystery Case Files: 13th Skull, the use of live video in the game, and what other movies and games inspired the game’s pirate theme.

The biggest new feature of 13th Skull is live-action (or “in world”) video. Tell us more about how this feature is integrated into the game.

With this game, we really wanted to do more with character interaction. There’s only so much you can do with a mystery if the player is alone in a location. Adding some company helps the world become a little more real. The ability to question characters gets you more ingrained in the story, although players can also skip it entirely if it’s not their cup of tea.

Live video is unusual to see in games. Why did you decide to make video such an important part of 13th Skull?

With each game we try to accept a degree of risk. Character and story development are challenges for mega-budget Hollywood productions, let alone casual, hidden object games. We experimented with running a B movie under the adventure in Mystery Case Files: Dire Grove, and thought it might be fun to expand on that with 13th Skull.

What other games or media (films, books, TV, music, etc.) did you draw inspiration from for 13th Skull?

I definitely watched a lot of True Blood last year and you can see that in the game. Many people who first see the FMV are reminded of Trilobyte’s 7th Guest and 11th Hour. I’m a big fan of those games and we’ve definitely tipped our hat in their direction. Little Loud’s Bow Street Runners was a big inspiration. Scott Adams’ Return to Pirate’s Island and The Goonies were favorites of mine growing up. We wanted to tell a pirate’s tale without the overused Caribbean swashbuckling theme.

Any funny or interesting stories about the development process that you can share?

Each new game is a learning experience. I’ve gained a ton of respect for folks who work in television and film. Modeling real life solely on a computer gives you the luxury of mostly wrestling with fixed variables. With video, you’ve got to deal with all the randomness of real life: weather, illness, noise, props, lighting, travel, people in general. It’s amazing how much effort goes into managing that kind of production.

Without you we wouldn’t be able to keep making our little adventures. We’re thrilled that we have such outspoken fans and look forward to creating new experiences for you in the future. We’ve got some neat things coming. There are certain stories that need some resolution.

Christmas comes to the iPhone: 10 games with festive updates

Freedom Sky, Made in USSR and more! Free iPhone Games for December 8, 2010