Home / News / Behind the Game: Little Shop of Treasures

Behind the Game: Little Shop of Treasures 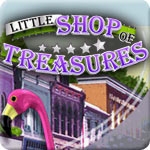 When Mike Dietrich, GameHouse creative director, started looking for the “next big thing” in casual games, he had no idea that he was actually searching for next big things: Item hunts and customer service games.

“I realized that we might actually be able to combine those two elements into one game, and compete with some other stuff that was out there at the time,” Dietrich said.

It was a peanut-butter-and-jelly pairing that would produce, to continue the analogy, a sandwich called Little Shop of Treasures.

If they were going to make room to blend business with their item hunt game, the GH team first had to strip away the parts of the genre that didn’t work. In Dietrich’s view, the one element that could not be done away with was the joy of location, a thrill he said hearkened back to his childhood.

“I had a subscription to Highlights and the thing I was guaranteed to go to was the page where all the items were hidden in this picture,” Dietrich said. “As a child, that was a really fun thing to do, and I would do it with my parents as well. It’s a fun activity and people obviously gravitate to it.”

The idea of sharing the game with others was one that Dietrich’s team wanted to hold on to. In may not have been specifically designed with group play in mind, but Dietrich says that the fun of group hunting was not lost on the team.

Those playing Little Shop with others may also be able to share a laugh with their game, if they spot some of the jokes hidden throughout the game’s stages. They run the gamut from small gags (items appearing in odd locations) to a much larger undertaking.

“Probably the most colossal would be the fact that every single person who works at GameHouse, we have about 60 employees here, their name appears in the game somewhere,” Dietrich said. “A lot of times those names were hidden in ways that played off their personality.”

The loaner names and some of the smaller odd items had a function too though, as they helped to populate some of the rooms that the team had a hard time filling out. Silly items like the hula girl became invaluable when the team began to butt up against the game’s central mechanic of helping customers shop.

“It got to be kind of a struggle when you say this is a garden shop, and the premise of the game is that people are coming into this store to buy things in a garden shop,” Dietrich said. “It was a unique challenge that other games like this one out there didn’t have to face.”

Though names and some goofy items may have helped to pad, the bulk of the game’s huntable goodies were much more mundane. Many came from royalty-free image sources originally, though they then had to be put through the ringer.

With two artists working on the game’s levels and around eight months to complete them, finding images was the only reasonable way of generating the number of pictures needed for Little Shop.

One of the most important facets of creating any game is balancing difficulty. Designers don’t want the game to be too hard so players throw up their hands, but they also don’t want them to blaze through their purchase in 20 minutes either.

Balancing the difficulty for a hide-and-seek title had one very obvious problem for its designers: Once they had hidden an item, the difficulty of finding it effectively dropped to zero.

“I was almost ineffective at rating the difficulty of things, I was so used to hiding them that I never had to look for them,” Nepsa said. “I knew where everything was.”

Even for first-timers though, the difficulty was very subjective. Some find an item right away, some stare could stare and the same screen for minutes on end and come away frustrated.

To combat the problem, items were assigned a difficulty rating from one to five right from the outset, and the team attempted the balance the numbers of easy and hard items in each room. Also, players are asked to find more easy items the first time that they play through a level, and harder items as they return to it.

As the team chose the difficulty for each item, they often got outside opinions, just to make sure that they weren’t mistaking an item they hid themselves for an easy find. The difficulty could also be tempered by the names of the items players are asked to find.

“In some cases, [Matt] might choose to use a more or less obscure name,” Dietrich said. “For example, a type of hat. If he got too specific on the type of hat, maybe it would better to call it a ‘brown hat’ instead of a ‘derby hat.’ We did keep some hard names, but we did it as a conscious decision.”

But, perhaps the most unusual part of creating a game in this genre, Dietrich said, is the symbiotic relationship that must develop between the art and game design teams.

“This game relied a lot on creativity of the artists,” Dietrich said. “In a lot of ways, Matt and the other artists who worked on the game were responsible for the level design of the game, which is something that was unique to this sort of game.”

Even the game’s name was collaborative, the result of a company-wide contest to come up with the best title for the new venture.

Perhaps drawn by the blending of genres, the game’s collaborative spirit or his old Highlights magazines, Dietrich said that GameHouse wants to build a franchise around Little Shop. But, he said, they might shoot for the big collaboration on a return visit: Letting fans in on the fun.

“I think we’d like to give a little more freedom to the player with how the build, interact and create their own shop,” Dietrich said. “Who knows? Maybe in a couple of months or so you might see something.”

How much is your favorite casual game company making?