Home / News / Behind the Game: How ZenGems found its path to enlightenment

Behind the Game: How ZenGems found its path to enlightenment 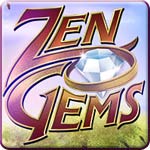 How do you make a game that is new, is innovative, original, but at the same time seems completely familiar? It’s perhaps the central question of casual gaming, and something Stephan Smith was struggling with as FreshGames, the company he helms, was looking for their next game.

“Our objective with the game was to create something that was familiar, but unique,” Smith said. “We wanted something interesting, but simple, easy-to-pick it up.”

It was a question they would soon find the answer to in ZenGems.

For the “familiar” part of the equation, FreshGames drew on the mechanic of matching three like items, one of the oldest casual gaming staples. But it was how they would twist and add to those game mechanics that would set their title apart.

“The whole objective with this game was to create something kind of different, but familiar, and I think that’s consistently what we get,” Smith said. “It’s not strictly a match 3 game, it’s a bit more weighted on the puzzle game.”

In ZenGems, the goal is not actually for the player to match sets of three gems, though that’s definitely a crucial task. The goal is actually to smash diamonds precariously balanced on those gems. The way to a level’s end is much less about recognizing groups of three than it is about finding a way to knock a diamond from its perch.

For Smith, part of what made this formula feel fresh was the inclusion of unique power ups.

“There’s a very interesting nuance as far as the pick ups that you use and how to use them and how to solve puzzles,” Smith said.

Chief among these, and the one that has created the most discussion and controversy is “The Pusher Ball.” The special item, which pushes a gem it lands on to the left or right, can be used for a big combo, but it can also bring a player precariously close to defeat.

“It was something that was kind of unique and at the time it really took a lot of time to figure out what made sense, how to use it and how to build levels behind it,” Smith said.

In much the same way that the team had to adjust to programming levels based on the ball, players usually need a little while to get used to the unconventional item, Smith admitted.

“We’ve done three major modifications to that ball to help people understand it,” Smith said. “It’s funny, when people get it, they love it, but when they first use it, they hate it.”

The FreshGames team wasn’t sure where or when they wanted to set their game, but they knew what they didn’t want.

“What we didn’t want to do is create another Mayan, Egyptian-themed game and or a Chinese, Japanese cliche looking game,” Smith said.

Smith wanted more than just a pastiche to slap a game mechanic inside of, he wanted a setting and theme that would compliment the game.

The team would find the spark for the first part of that equation in the film “Spirited Away,” an anime classic by director Hayao Miyazaki.

“That’s where the inspiration for the artwork came from,” Smith said. “There was something very interesting about that, and we wanted to create some sort of mythical Asian theme.”

When looking for the right plot, the team was, again, pretty specific. They wanted something that would be fun, but would be more than just the idle chatter seen in many games. Eventually, they found the theme that would come to illuminate ZenGems: Enlightenment.

“We wanted to do something that was a story of enlightenment, without being cliche,” Smith said. “I think we kind of captured that.”

Most casual games are developed in the span of a few months, though some occasionally extend past the “year” mark. But FreshGames had a comparatively luxurious schedule of a couple of years to complete ZenGems.

“In the midst of building an engine, it took us a little longer than we anticipated,” Smith said. “If we hadn’t built an engine it probably would have shaved a year off of the development.”

Even with the engine complete, the development time was also increased by some of the unconventional facets of gameplay in ZenGems. By changing things up, the team had unwittingly created some extra work for themselves.

“Once we finally fine-tuned the mechanic, the more difficult end of it was really creating the levels,” Smith said. “It took us about three months to figure out what worked and what didn’t visually and mechanically. I really think that the pusher ball, as simple as it is, created a whole new twist. To throw in that kind of a power up really changed the dynamics of that game.”

With so much fine tuning to be done, it was difficult for the team to know exactly when their game was done. But late in the development cycle, the team started showing the game outside the studio walls, and it’s then that they were convinced they were on to something.

“It’s kind of semi-intuitive. The market is changing so much that nobody knows what’s exactly right,” Smith said. “I think once we put it outside to some other people, the feedback that was got was positive about what they were seeing. There was still a lot of tweaking, but I think that we knew that we were going down the right road.”

Just In – The Scruffs