Home / News / Behind the Game: Gardenscapes

Behind the Game: Gardenscapes 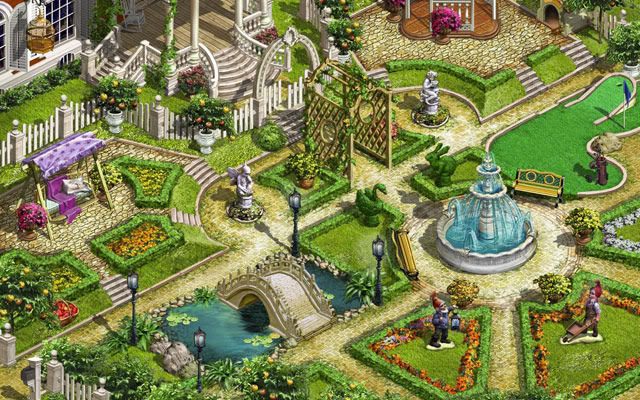 Learn how Playrix Entertainment’s Gardenscapes evolved from "Fishdom with butterflies and flowers" to the hidden object/gardening hybrid that it is today, which characters didn’t make it into the final version of the game, and what 1960s British pop group inspired Austin the Butler’s sideburns in our Behind the Game interview with Playrix’s VP of Production, Igor Elovikov.

What’s the idea behind the game? How did you come up with it?

It struck us that there are lots of people who love caring for and decorating their gardens. And this is not just about planting flowers and growing vegetables, but about design and imagination. So we decided to give them a chance to get creative and use their outdoor décor skills, while hunting for hidden items. At first, we were thinking about creating Fishdom but with butterflies and flowers. But it seems that we strayed from this initial concept…a lot.

It’s interesting that Gardenscapes was inspired by Fishdom. What are some of the ideas that you borrowed from Fishdom that made it into Gardenscapes?

One of the things is the idea that people love interactivity and they enjoy customizing things to their taste, no matter whether it is a fish tank, or a garden. In Fishdom people like that their finny pets let them know when they are hungry or when they feel lonely and need a company. In Gardenscapes we have Austin, the butler, strolling around the garden making comments, giving snippets of advice. We’ve poured a great deal of work into the dynamics and interactivity both in the garden and on the I-SPY levels trying to make everything feel alive and real. 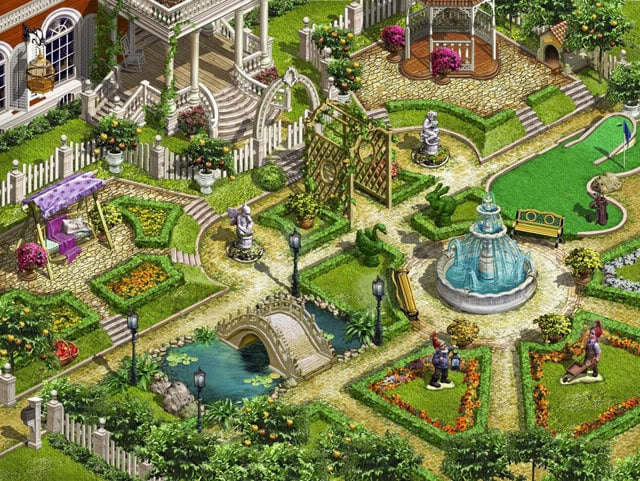 Did you ever discuss making Gardenscapes a match-3 game instead of a hidden object game, like the first Fishdom was?

No. From the very start, we felt like crafting a hidden object game. The initial concept of Gardenscapes, as I have mentioned, was an HO game where players needed to buy flowerbeds and butterflies instead of fish and to make floral bouquets. It took us almost a month of discussions to shape this idea into the current game’s concept, but the genre of the game was a no-brainer for us.

Please tell us about Gardenscapes gameplay and its storyline.

Well, one day you receive a letter from your grandfather’s butler saying that you have inherited his gorgeous mansion together with its garden. (Wouldn’t that be nice, eh?) The enclosed photo shows a beautiful garden, so you hurry to the old man’s place. When you arrive, you discover that the garden has gone to ruin, and you’ll have to work hard to restore it to its former glory. To earn money for its renovation, you decide to organize a jumble sale, because the house is jam-packed with old things. As you progress through the game, you become an integral part of the city’s community, receiving letters from its citizens, reading articles from the local newspaper and competing in the "Best Garden" contest.

To be honest, the game’s storyline has been revised a few times. Initially, there were characters that are no longer part of the game’s story, including a corrupt lawyer, a warm-hearted city’s mayor, and representatives from the Gardeners’ Club. (You can have a look at their sketches below.) 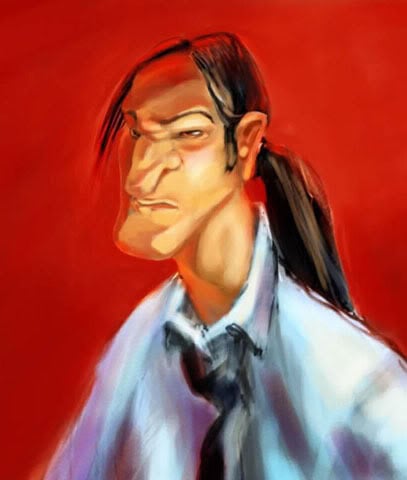 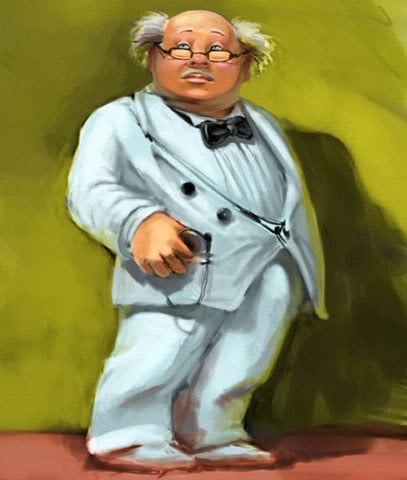 Some Gardenscapes characters that didn’t make the cut. The corrupt lawyer (left), city mayor (right), and ladies from the Garden Club (below). 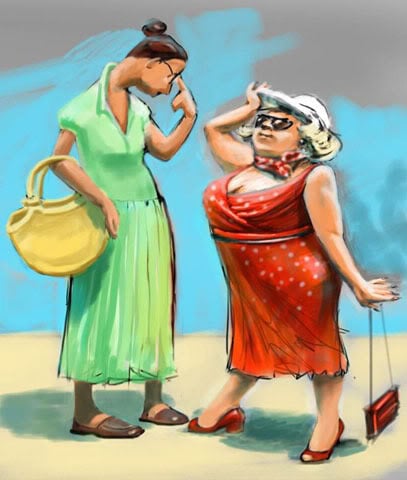 This is what creating a game is all about – mulling over some ideas, giving the green light to some while turning down the rest, finding the perfect blend of story and gameplay, having all the components and tiny parts pleasingly and appropriately combined.

Gameplay-wise, Gardenscapes is a mix of three different genres: hidden object, time management and sim. You earn cash as you progress through hidden object levels and spend it to buy garden accessories to customize it to your taste and compete in the "Best Garden" contest.

Players hunt for hidden objects in different rooms of a huge house and get money from the customers for every successfully found item. The environment on the hidden object levels is fully interactive. For instance, the clocks in the rooms show real time, you can turn on and off all electrical appliances – fans, TVs, radios as well as play with butterflies, etc. This creates a very lively and fun atmosphere.

How did you come up with the character of Austin, the butler?

It just struck us at some point that a beautiful mansion and formerly stunning garden should have a butler. Once we thought of this, we didn’t hesitate. At first we weren’t sure what Austin should look like, but eventually we settled on the image of a tall, sophisticated butler. His entertaining character is a big part of the game. There is a lot of comedy in what he says and how he interacts with the player. He’s just a funny guy to watch. You can easily get Austin involved in any activity – playing with the dog, watering the flowers, pruning, etc. simply by clicking on him. 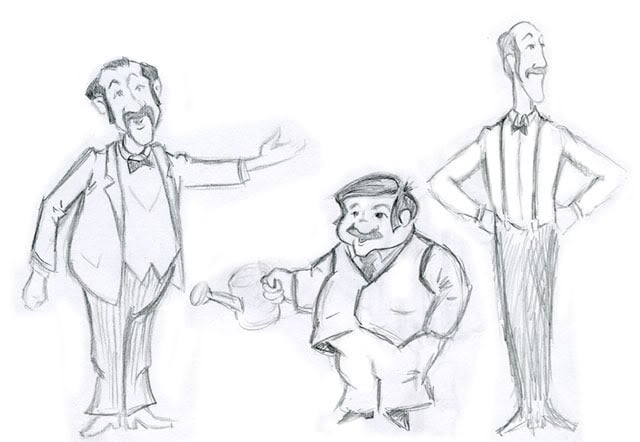 Some early character sketches of Austin the Butler.

The production process lasted for over 13 months, and this time span speaks for itself. While working on the game a lot has been revised and modified a number of times. Our artists had to face some challenges, such as incorporating fully-animated 3D characters in the picture, or having the garden items look harmonious and integral, no matter what combination of accessories the player settles upon. So I can’t say that the development process was totally simple and smooth. 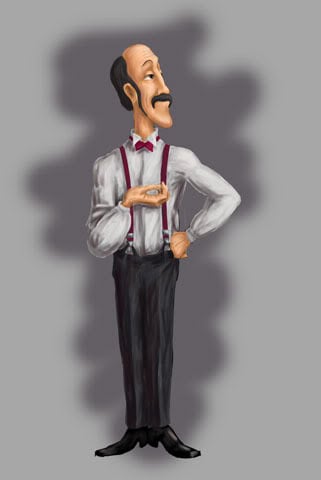 Does Austin remind you of some famous person? Well, the image of Austin was inspired by the photos of The Beatles from the 60-s. It is thanks to the "fab four" that our butler wears a moustache and sideburns.

What about the name? Why Gardenscapes?

As usual, we faced a number of tough choices, as there were several things to consider. We were initially reluctant to use the word "Garden" in the name, because we were afraid players might think it was another time management game where you need to plant and collect vegetables and fruits to progress. After a number of brainstorms we came up with the name "Cutting Hedge Design," which we lived with for a while. But it felt wrong because the garden is the central part of the game and we felt the name should reflect that. So in the end we settled upon the name "Gardenscapes."  It’s a very pretty name, and evokes associations of decoration and design.

Do you think there will be a sequel to Gardenscapes?

When we began the work on Gardenscapes, we were sure that a sequel to the game would follow. Our artists even came up with a couple extra backgrounds for the hidden object levels. But later, as we progressed through the development process, we decided to increase the number of levels, and to incorporate as many twists and fun features as we could. But even now that the game is finished, we still have plenty of great ideas left over! So, we’ll have to just wait and see.

Can you give our fans a few tips on garden design?

Well, be creative and follow your intuition. I guess that advice is pretty universal, isn’t it?