Behind the Game: Coconut Queen 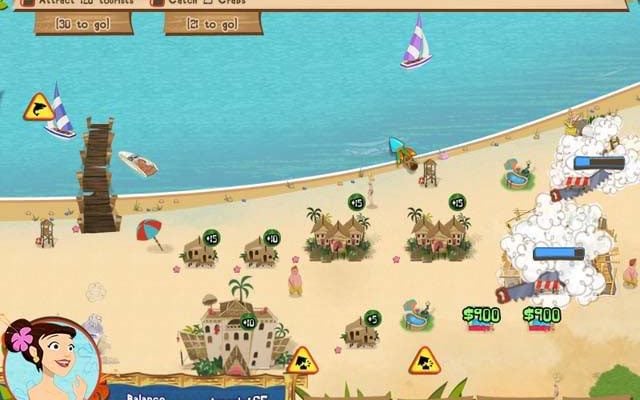 Seattle residents have various ways of coping with the city’s notorious rainy season: Seattle-based iWin chose to create a game set on a sunny tropical island paradise. iWin’s Andy Megowan talked us through the development of Coconut Queen and how what started out as a relatively modest project evolved into one of the company’s flagship titles of 2009.

Our review of Coconut Queen said it was the first game that can really compete with Build-a-lot in every respect, which is high praise! Can you talk about how you were inspired by Build-a-lot, and also in what ways you took Coconut Queen in a new direction?

That was high praise indeed, and I hope that the building game enthusiasts took note!

The creators of Build-a-lot are old friends of ours. Both companies share a love of Real-Time Strategy (RTS) games, and believed that with the right presentation, it would be a very satisfying experience for our audiences. Art Director Israel Evans and I went one way, creating the whimsical worlds of Westward and then Garden Defense, and they were both critically acclaimed games. In the meantime, our friends at HipSoft found a very different-and very successful-path into the hearts of casual gamers everywhere. 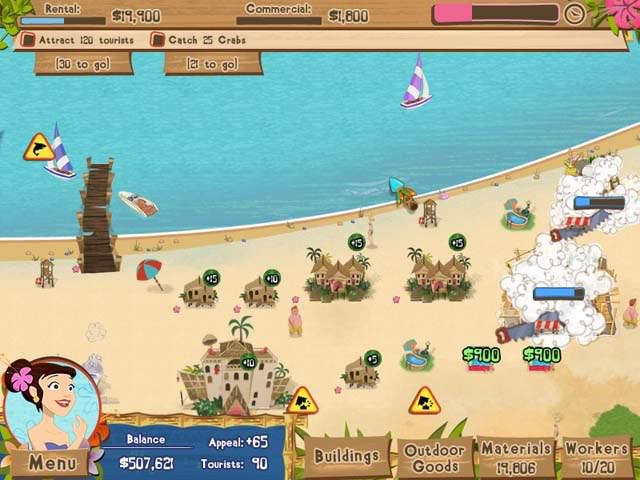 I really liked how HipSoft solved some of the design challenges in resource management, from how they created conflict without violence, to how they simplified the traditionally complex resource management and economy and made something that was perhaps unrealistic, but also undeniably elegant. As our studio started creating a game about tourism and tropical islands, I knew that by creating a world that works in a similar fashion, our audience would have an easier time grasping how to play.

Providing something familiar like that was important to gaining acceptance, because we knew that Coconut Queen would be refreshingly new on several fronts. We had a fresh look, unlike anything else in the world of games, which was inspired by our subject matter. We broke away from a level with a handful of "lots" to let the players build practically anywhere-and deal with the consequences of their choices.

We broke away from the stale, interchangeable, twenty-something, single perky female character with no dreams beyond a retail career, with no adversity or conflict in her life." We discovered Liz, an intelligent and passionate character with aspirations and challenges to overcome. 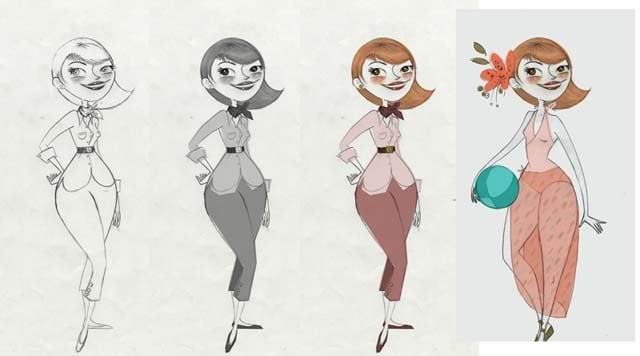 And our game takes place in a very special world. The characters, events and stories are tied very closely to the Island of Lui-Lui. There is an element of exploration as you uncover new parts of the Island and new things to do there. You are also invested in the environments you build in a very special way: you develop your resorts over the course of several chapters as the many stories unfold. It is a world that you really want to visit, with stories and mysteries that you really want to know how they turn out!

Oh, and we have a huge dose of humor, too. Every time you play, you’ll find something new to laugh at.

Why a tropical island theme?

It’s not just "tropical island" themed. It’s "Queen with devoted beefcake man-servants on a tropical island" themed! It’s these three things together that made a wonderful foundation for both a building game and a fun situation. We could make a game that was definitely For The Ladies, and we could share a laugh as we poked fun at a woman’s fantasy. There is plenty of room for fun and games in this scenario. 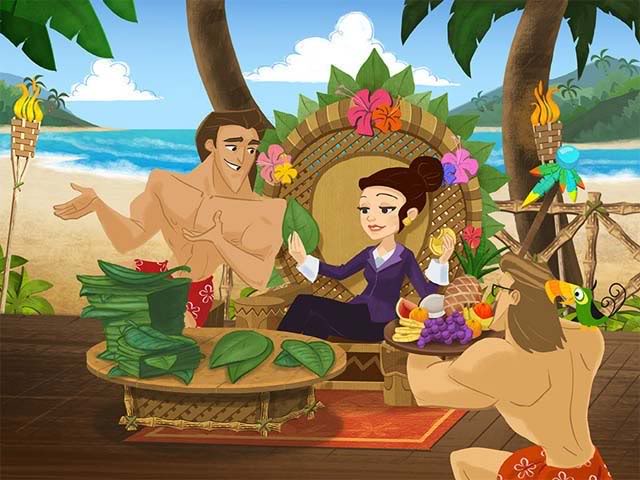 Also, our studio is in Seattle, which is known for having two seasons: August, and The Rainy Season. Spending our days creating a sunny tropical island paradise was a great way to keep the worst of the storms and snow at bay.

You’ve said before that Coconut Queen started out as a much smaller project and was then "embiggened" into something more ambitious. Can you talk about that process?

It’s true, Coconut Queen started out as a much more modest production. We actually wrote the first version of the game in about two months last Summer. It was enough to convince everyone that it would look great and be fun, so we moved forward with a simple game about building and maintaining a resort. We came up with lots of great ideas, but firmly set them aside in order to meet a deadline and a budget. "If the game does okay," we reasoned, "we can put this cool stuff in the sequel."

A few months later, we showed a feature-complete version of the game to the rest of the company. The executives and directors took a look at Coconut Queen, and said, "This is fantastic. What would it take to turn this into a bestselling, premium title?" This was an incredible opportunity! We were able to collect everyone’s feedback, and bring back many of the features and cool touches that we had set aside before. 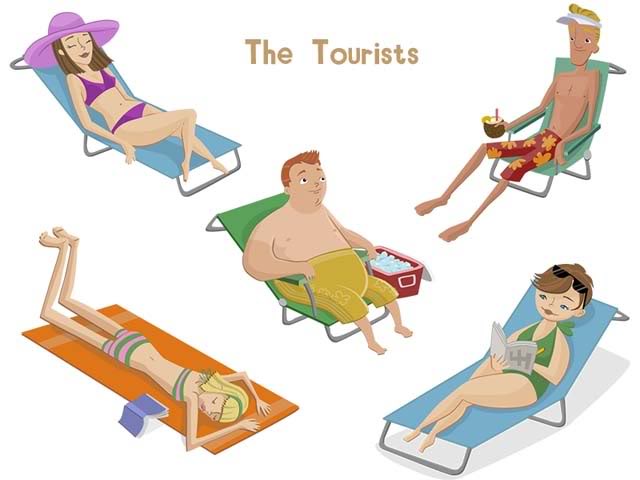 We added more voice work, more animation, tourists and other wildlife. We told more of the stories that we wanted to tell. We added more buildings to allow players more ways to build up their resorts. We reinforced the ecological messages through the abilities to clear-cut (and later re-plant) jungles. And we added a whole new "Free Play" mode, a way to build resorts any way you wanted without worrying about goals or time limits.

What challenges did you face during development?

We had a challenge getting people to deliver the style of the game. We chose a very distinct look and feel for the game. Look at most of the casual games out there, and they will all start to blur together; they look the same, they sound the same, and they play the same. Part of that, we found out, is because it’s easy to duplicate the same styles when making a new game.

Art Director Israel Evans and I decided early on that we wanted a look, one that not necessarily any old overseas art studio could deliver. We got the look that we wanted, but we had to work with half a dozen art teams all over the world, and train each of them on the distinct art style! Delivering on the dialogue, sound effects and music was somewhat easier than nailing the art style, but still involved lots of tries to get it right. 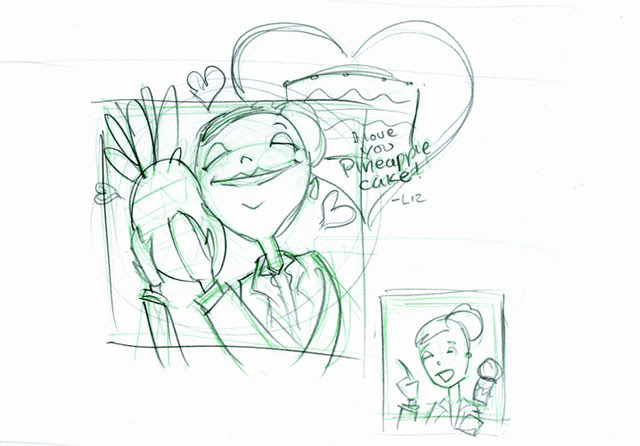 Also, it took a lot of work to make the game "simple." In Coconut Queen, players are interacting with a complex system, absorbing tons of information, and making hundreds of decisions. It took quite a feat to provide all of this information to players without overwhelming them, and also find the right way to teach it. By the time we finished, we had completely rearranged the layout of text, windows and buttons seven times. And I know I worked on getting the tutorials right for weeks. But you won’t notice any of this complexity while you play, and that’s how we know that the effort was worth it.

What aspects of the game are you most proud of?

I’m most proud of how we didn’t compromise on quality. In the finished game, we did nearly everything that we dreamed of doing, and it shows.

It’s hard to get people to chuckle, let alone laugh, while playing a game. Games are meant to be played a lot, so it’s difficult to find something that doesn’t plunge from "funny" to "really annoying" the hundredth time you experience it. I’m proud of the humor in the art, in the character dialogue, and in the stories.

And I think the art style represent a genuine achievement in the world of casual games.

Tell us about the art style.

The goal was something fun and quirky, yet recognizable and easy on the eyes. We were heavily influenced by the art of Disneyland, namely the classic It’s a Small World and the Enchanted Tiki Room attractions. We used a uniquely retro American take on Tiki Culture as our graphic theme. Specifically, we mixed in a bit of abstraction and texture in the style of Disney artist (and legend) Mary Blair, and experimented with a degree of graphic flattening and heavily stylized forms taken from the retro artwork of Josh Agle "SHAG" and Brandon Ragnar Johnson. 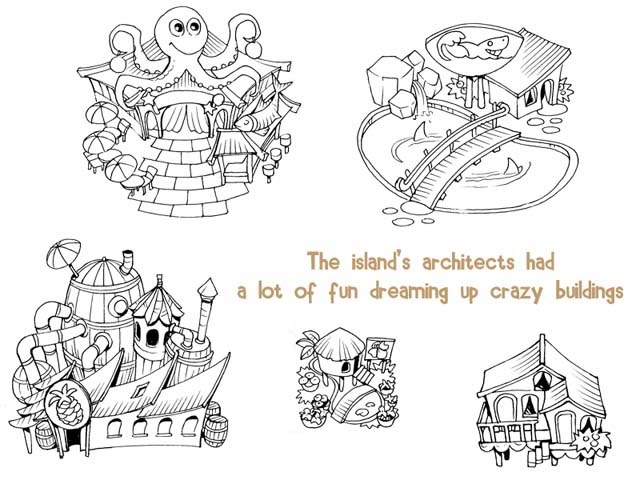 What we liked about all three of these artists’ styles was the strong sense of stylization, powerful use of color, and a wonderful use of simplification to increase clarity. We preferred to start with the drawing style of Brandon Ragnar Johnson, with its excellent feel for form and modern sensibility. The way he draws people has a sexual dynamism which features compelling shapes, lines and curves. It is more along the line towards realistic figures, yet still retains a cartoon-like feel.

Mary Blair’s stylized textures and interesting pattern work provide a lot of interest and mood appropriate feeling that we definitely wanted to use. We drew from Josh Agle’s stuff the mood and cultural feel as well as some of his stylistic abstraction of shapes and environments. The whimsy with which he treats his subjects is very charming and we wanted to capture that. All together, they presented a great source of inspiration to us and our art teams. 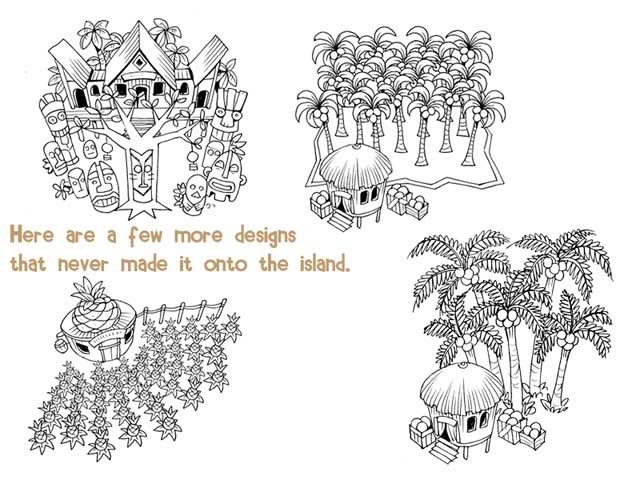 Are there any other funny or interesting stories about the development of Coconut Queen that you could share?

From experience on other titles, I knew how much life could be brought to the experience if we used a genuine human voice to acknowledge the player’s actions, and inform her of unfolding events. This was particularly important since things can happen when you’re not looking, and we want to draw your attention to them.

Now, Coconut Queen has always been about making a game, tongue-in-cheek, for the ladies. So I worked with Margaret, one of our writers, to come up with some funny things for a "hunk" to say in a worshipful tone dripping with innuendo. We then sent these lines out to voice actors to audition, and got back several readings. Then the fun began. One of our team members, Colby, was then charged with inviting each of our female coworkers to listen to all of the samples, and then vote on which deep, husky voice made her feel "warm and melt-y." That lucky guy went on to record ALL of the lines in the game. Oh, and if you’re so inclined, a few of the gems are also available as ringtones! 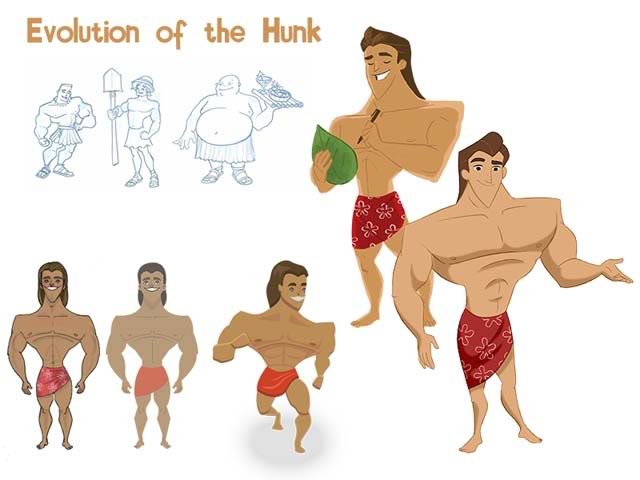 Another funny thing happened because we’re based in Seattle. The price of our beautiful forests, mountains and lakes is that we get a lot of overcast days. About halfway through the development of Coconut Queen, an artist saw a screenshot of the game, and it bothered him. He noodled around with that screenshot, changing some colors and tweaking some things, then sent it back to us and said, "How about doing this instead?" And we looked at the new picture in shock. The artist had added warmth and sunlight to the image. Because of where we lived, we simply hadn’t noticed that our "sunny, tropical island" was actually "cool and overcast" until someone brought it to our attention!

I hope everyone loves the game enough to ask for a sequel. I can’t wait to see where I’m headed with this story. Will Queen Liz hook up with Kane? What’s on the other side of the Island of Lui-Lui? Why do they have a palace identical to her own? And who’s that man on the throne? I want to know!!

Sound off about this article in our Coconut Queen forum.