Home / News / Behind the Game: Azada

Behind the Game: Azada 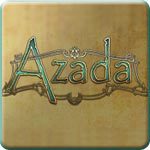 When Big Fish went looking for the next big thing in the seek-and-find genre, they found their answer in the past: An amalgam of an item hunt and a classic adventure game that they would soon dub Azada.

“Big Fish had been developing the Mystery Case Files, and had been very successful,” Emmanuel Marty, director of Big Fish Studios Europe said. “We wanted to go beyond that. We wanted to make a game for the audience that

Mystery Case Files had developed for us, so we started looking at adventure games like Myst and we tried to make that accessible for our audience.”

One room, one puzzle

Those classic adventure games were a good jumping off point, but, as Marty points out, significant changes had to be made to their formula before they would work for the casual market. One of the first changes was one of scope.

In Myst, players often move across an entire level (or even into a different dimension) before an item can be used. Marty ensured that all of the puzzles were contained to one room.

It was a move that not only helped keep the pace spry, but helped make the game more accessible to those who may only have a few minutes to play on a coffee break.

Classically, adventure games aren’t big on testing reflexes, and that’s one respect in which Azada stayed true to its source material, as it were, as the developers chose which types of mini-games would be paired with its central seek-and-find-and-solve mechanic.

“We didn’t want to have any hand-eye coordination games in there,” Marty said, “most of the time you can just look at the page and say ‘OK, what am I supposed to do here?’. You don’t have to do any arcadey stuff. They’re just thinking puzzles.”

There was also a certain level of difficulty that the team was aiming for. With so many different puzzles to solve, they didn’t want players to get hung up on any one for too long.

As one final ward against players getting stumped, Big Fish included magical, one-use gems that could allow a puzzle to be skipped.

Though mini-games are key, the cornerstone of Azada is its puzzle rooms that task players with not just finding hidden items, but figuring out a way that they all work together.

Marty admits that even he was a bit surprised at how much adding a puzzle element (and the additional sense of accomplishment therein) changed the feel of the genre.

“The feedback that you get as a player, we tried to give as much feedback of success as possible,” Marty said. “We were surprised with the reaction of the players, it was pretty unanimous across the board.”

There was one other component of the classic adventure that had not been addressed, and that was a great narrative thread that could pull players along, urging them to play “just one more puzzle.”

It was an unusual sort of collaboration that helped create Azada‘s story of prisoner Titus.

“The original story was thought up by Emmanuel and his wife,” said Patrick Wylie, Vice President of Big Fish Studios. “Then it came to my wife actually, she actually wrote the story and worked with Emmanuel and John Cutter, Senior Game Designer/Producer at Big Fish Games. The three of them essentially worked together and got the whole story and the progression of the game.”

Wylie said that a solid storyline was a key component in making Azada a truly compelling experience.

“Just like audio and art and gameplay mechanic add to the immersive element of a game, I think story ties into that too,” Wiley said. “We didn’t want to just make a story that is ‘Here’s a map, there’s 50 dots in it, get to the end,’ which is fairly prevalent right now.”

Though storytelling is important and gameplay is even more key, it’s all for naught if no one makes the leap and downloads a game. When trying to draw players to their new franchise, Big Fish settled on a name (also suggested by Wylie’s wife) that was less about telegraphing what the game was about and more about summoning up an air of mystery.

“We wanted a name that would sound magical and mysterious, but at the same time would sound like a magical incantation, like ‘Shazam’ or that kind of thing,” Marty said. “Even if it doesn’t tell you exactly what it is, it entices you to check it out.”

As tip of the hat to the game’s plot, there is a meaning to “Azada,” an Arabic word that translates to “emancipation.”

Despite a slightly mysterious name and being sort of an unusual take on a well-worn genre, Wiley said that Azada has found quite an audience.

He admits that it’s been a surprise how well the game has performed, a scenario much like its predecessor, Mystery Case Files: Huntsville.

“We feel like we’ve done it again, with this game,” Wiley said.

The End of Cloning