Home / News / Because We May: the videogame sale to rule them all

Because We May: the videogame sale to rule them all 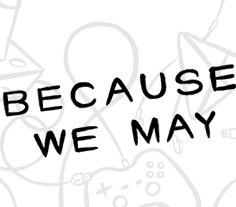 We’ve all bought a game on sale. Who wouldn’t? There’s something awesome about getting a huge discount on a great game that just makes us gamers happy people. If you get that same “smart buyer” rush every time you get a game on sale, you’re about to feel like you’ve found heaven. Prepare for Because We May, one of the biggest sales weeks we’ve ever seen.

Why is such a big sale taking place? Ironically, it’s a celebration in honor of the platforms that allow developers to make sales in the first place. The stance of Because We May is as follows: “We believe that developers should have the freedom to price their games how they like, without interference from the online stores that sell their games.” Who could disagree? Competitive pricing makes everybody happier.

To honor the platforms that allow developers to control their pricing, Because We May is collecting hundreds of games and developers who are putting their games on special sale for the last week of May (May 24 through June 1). Platforms included for the sale are the iOS App Store, Google Play, Steam, direct from developers, and many others.

Besides the fact that a huge portion of these games have either earned award nominations or a Metacritic score of over 75 (the list of games we’ve just mentioned all scored 4.5 stars or higher here at Gamezebo), they’re also generously discounted.

World of Goo is only $3 on Mac, PC, and Linux, when it’s normally priced at $20. Braid is $5 instead of $20. Super Meat Boy is $5 instead of $15. Altogether, there’s an amazing selection with almost four hundred great games for a great price.

If you’re looking to save money on a ridiculous amount of amazing games, head over to Because We May and see if they have a great game you’ve been on the fence for. You’ve got a week to check out the sale, see if any new games are added to the mix, and save a ton of many in the process.

The only bad thing about this sale? You’re wallet is likely to feel a little lighter by the end of this month.

No expiration date: how Hidden Variable kept an app about groceries fresh [interview]