Home / News / Be a Worm, Eat Cakes – Wormate.io is the Next Slither.io

Be a Worm, Eat Cakes – Wormate.io is the Next Slither.io 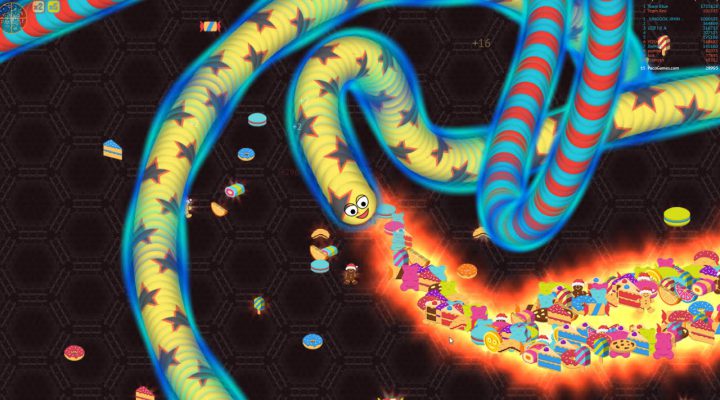 If Wormate.io looks familiar, that’s because it is. The game takes its cues from the hugely popular Slither.io, but adds extra features and casts you as sweet-munching worm instead of a dot munching snake. Much better.

The aim of the game is simply to survive for as long as you can. You start off as a stumpy, scrawny little worm, but as you chomp down on the confectionary that’s scattered around the huge open world environment you get progressively bigger.

At first you’ll find yourself being overshadowed by enormous, colossus-like worms that are hundreds of times your size, but you’ll soon catch up with them if you keep consuming goodies.

Every so often you’ll come across a great big glowing trail of sweets and cakes that you gobble up in a single unbroken line. These are the remains of a rival worm that has died.

To kill another worm, you need to trick it into colliding with your body – a feat that obviously gets easier and easier as your body grows.

Of course, the bigger the worm the more abundant the pile of yummy stuff it leaves behind, so there’s an incentive to try and take down the giants. But combat isn’t easy when all you’ve got is a long wriggly limbless body.

Aside from dodging, you’ve got one move. If you hold down one of the mouse buttons you’ll move faster, though you’ll get progressively shorter as you sprint. The most powerful players are the ones who master the sprint to outmaneuver their opponents.

The secret of Wormate.io’s fiendishly addictive playability is its simplicity. All you need to do is dodge your enemies, and once you die it takes a couple of seconds to jump back in and try again.

But a handful of power-ups elevate Wormate.io above its slithery rivals. These include a magnet for drawing in extra sweets and cakes, a score multiplier, increased maneuverability, a speed boost, and more.

There are two modes, too – deathmatch and team deathmatch – and up to 300 players can compete in the same environment. It’s a fun, endlessly replayable game, and you don’t even need to install a program. Thanks to PacoGames, Wormate.io is playable in your desktop or mobile browser – along with a host of other snake games.

Check it out right now.