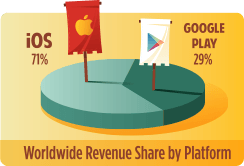 In an infographic entitled “Game of Phones” – making it so punny I couldn’t ignore it – mobile analytics provider App Annie detailed the state of the union for today’s phone and tablet gaming giants. In other words, they did some research to bring you an updated answer to the burning question you’re no doubt asking daily: who’s doing better, Android of iOS?

The short – and perhaps predictable – answer is that Apple’s many iThings still remain dominant where the bottom line is concerned. While Google Play and iOS are both growing their revenue at a dead-even 14%, the latter is raking in the lion’s share of the world’s mobile revenue – with a comparative 71% to Android’s 29. For those keeping track, that’s well more than double.

With that said, there are some things the two bitter rivals have in common (he says, heaping fuel on to the fire). Namely? The fact that they earn more revenue from the US, the UK, and Japan than from the rest of the world combined. Though in different orders in the top three, this trifecta makes up 60% of Apple’s mobile revenue, and 65% of Google’s. As App Annie points out, the message is clear: “if you’re a publisher that’s looking to generate global revenue scale, then you can’t ignore these three countries.”

Not to be left entirely in the dust though, Android managed to eek out of the infographic with at least one notch in its belt: the future. If you take a look at the countries where revenue is growing the fastest, Japan tops the iOS list at 22%. Glance at Android, however, and you see Brazil ranking in at 88% – more than triple that of the closest competitor for growth. Here again App Annie ways in smartly, noting that “A key factor perhaps being the import tax levied by the Brazilian government, pricing the iPhone and iPad out of people’s disposable incomes.” Either way, however, the boon is Google’s, as they’re clearly exploiting the chance to gain a strong foothold before Apple sets up their much-rumored manufacturing base in the country.

Amid all the jargon, some clear truths remain. Android seems to be a far more accessible platform for the developer and in many cases the consumer, while Apple is far and away more appealing to those who do have access to it. So much so that the company is making $2.45 for ever $1.00 brought in by Google. As other companies boom, however – such as the briefly mentioned Russia and India – the issue of being first to the plate could very well come back to haunt Apple. After all, we’re looking at some of the world’s biggest populations and fastest growing economies here.

In any case, soldiers, it’s your turn to do battle! (What, was I going to let their brilliant pun float in the wind!?) Do you think Google will ever bring Android to a place where money flows as seamlessly as it does with Apple? Is Apple sewing their own defeat with slow expansion into other countries and overly firm pricing? Did I lose you with that soldier pun? Let us know in the comments below! And be sure to check out the full infographic right here.

Could TimeSplitters 4 be free-to-play under Crytek’s Gface?