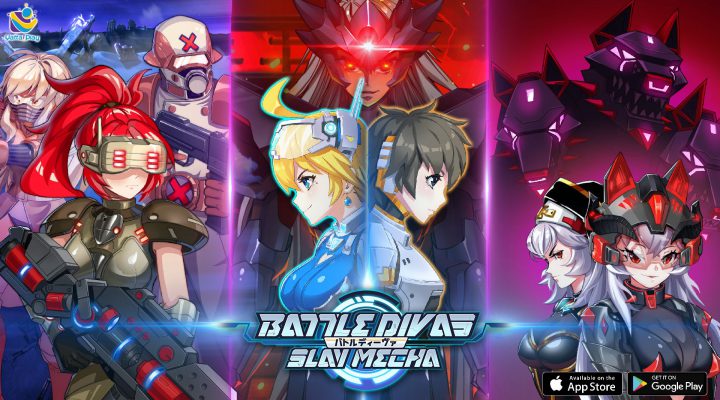 Gacha RPGs are great and all, but they can be frustrating too. Sometimes you want to feel like your progress in a game is the result of effort, without good luck giving you a boost or bad luck getting in your way.

Battle Divas: Slay Mecha does away with the necessity for character gacha pulls, letting you collect every character through gameplay progression. And that’s just one of the things we like about it.

In the distant future, following a nuclear war and the subsequent global radioactive contamination of planet Earth, the last vestiges of humanity have moved to Icarus VI, a vast space station.

Decades later, a group of students from the Hero Academy onboard Icarus VI is sent back to Earth on a recon mission, with the expectation that they’ll discover a planet in a state of burgeoning recovery.

Instead, they discover monsters.

Enter: you, in the guise of an army of kickass divas, armed to the teeth and clad in robust yet stylish armor.

Battle Divas: Slay Mecha sees you going up against these monstrous Earth-inhabiters in grid-based, turn-based battles. These battles give you much more control than the average mobile RPG, letting you move your characters around and choose your attacks.

Between the standard stages you’ll encounter boss monsters, made up of different parts that you need to take down in the smartest possible sequence, disabling their skills in the process.

There’s also an equipment system with more than 400 parts to collect, many of them specific to certain heroes, granting them powerful abilities.

Naturally, there’s also multiplayer, with a variety of PvE and PvP events to get involved in, letting you show off your load-outs and tactical nous.

All in all, Battle Divas: Slay Mecha looks like a refreshing alternative to the countless gacha games that are currently clogging up the RPG section of your local mobile app store.

It’s available for free right now on Google Play and the App Store.