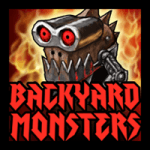 We hear it’s somebody’s birthday. Backyard Monsters, a real-time strategy (RTS) game on Facebook, officially turned 2 on March 14! To celebrate, KIXEYE has posted a timeline that chronicles the game’s development and evolution. You can view exclusive artwork, archived footage, and take a look back at Backyard Monsters’ milestones.

“We’re proud of what Backyard Monsters has achieved over the last two years,” stated Kixeye co-founder and executive producer, David Scott, in a press release distributed on Wednesday. “It was a huge leap forward in terms of what was possible in the browser from a design perspective and proved that high quality games could exist on the Facebook platform.”

“It’s come a long way since we launched, and it continues to highlight our desire to innovate, take risks and make the most fun browser-based games on the planet.”

The press release also listed some very interesting numbers related to the game:

But the festivities don’t end with death tallies. Backyard Monsters is also giving players a chance to participate in “Monster Madness,” during which you can search for a new Inferno Champion Monster, Korath.

Visit the Backyard Monsters Facebook page for the new timeline, and for more fun with vicious digital monsters!

Diablo III gets a release date