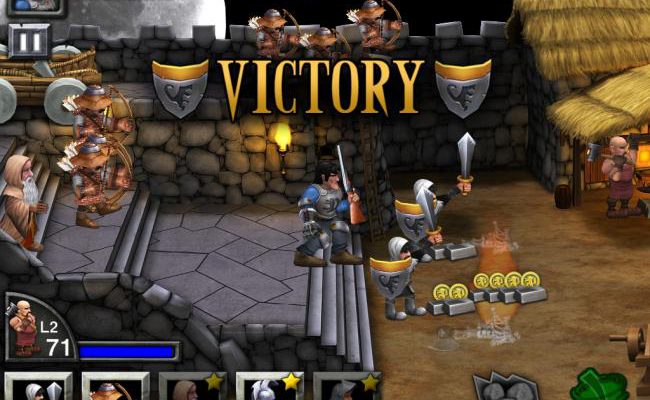 Peanut butter and jelly, fish and chips, Hall and Oates – some pairings just make perfect sense. So when Backflip Studios announced that they’d be making a castle defense game based on the penultimate scene from Army of Darkness, in which the hero defends a fortress against an evil army of the undead, we knew they’d struck on an idea that was pure movie licensing gold.

We recently sat down with Backflip Studios CEO and founder Julian Farrior to talk all things Army of Darkness, from his love of the movie to what we can expect from Backflip’s upcoming game. Here’s what he had to say;

Backflip Studios have made a name for themselves over the last few years by creating great original content like Paper Toss, Strike Knight and Graffiti Ball. How did you end up working on a licensed title like Army of Darkness?

MGM approached us with a library of very interesting IP that they wanted to target toward mobile. As a studio, we had a particular interest in this Bruce Campbell cult classic as it was a Backflip favorite. MGM was extremely creative in making this deal happen, and took an interesting approach where they aimed their IP only toward top notch independent developers that they felt could make compelling games and who had shown some previous success. We generally focus on making games that are our own original IP but we felt this was rare opportunity to create a game around a movie we truly loved. In addition, we felt the pivotal scene in the movie where Ash, the protagonist, defends Arthur’s fortress from the Deadites (living dead), screamed to be made into a castle defense game. It was a blast and we are very pleased with the final product.

It’s been nearly 20 years since the release of the film, yet fans of the series are just as devoted as ever, no doubt excited to be able to put Ash’s medieval battle in their pockets thanks to your game. What is it that you feel makes the Evil Dead franchise such an enduring cult classic?

I think Bruce Campbell, Ash, has a lot of appeal to the hardcore movie fans and gamers alike, given that his humor and delivery seem to embody the spirit of nerd captured in a leading man’s body. His dialogue is simply some of the most memorable and hilarious in existence. In addition, the movie is rich with great characters and a whimsical plot. Lastly, it doesn’t hurt that one of the greatest directors of our time, Sam Raimi, was involved in the film. I thought that some of the shots were absolutely brilliant 18 years ago, when I first took a disgruntled date to see it in the theater, and I feel the same way today watching it on DVD.

We’ve seen a lot of great side-scrolling defense games pop up over the last year, from Trenches to Paladog. What is it that sets Army of Darkness: Defense apart from the rest?

We set out to make the best castle defense game possible on a mobile device, whether you knew the IP or not. It combines the fun of directly controlling a character, Ash, with the balanced economy of a traditional castle defense, deciding which assets to deploy and when, in order to defend your castle (or in this case the Necronomicon). In Army of Darkness: Defense you control Ash, and subsequently the camera, by touching the left or right side of your screen. You can upgrade his health, damage, iron fist, chainsaw, boomstick or one of many powerful spells with gold you pick up within any of the 50 waves. In addition, you can upgrade your castle with archers, catapults, stronger book defenses or the pit. Lastly, and most importantly, you can deploy any number of troops that you unlock throughout the game including peasants, swordsmen, spearmen, archers, horsemen, armed guards, horsemen, Arthur, Henry and many more. What really sets this game apart is how we integrated the outstanding IP. We used over 150 lines of the now legendary dialogue from the movie, all of the enemies including the myriads of skeleton warriors, flying driads, mini Ashes, Sheila, pit monsters, Evil Ash and all of the heros not-the-least of which is Ash. The marriage of a well designed game with stellar IP allowed us to create a very compelling experience. 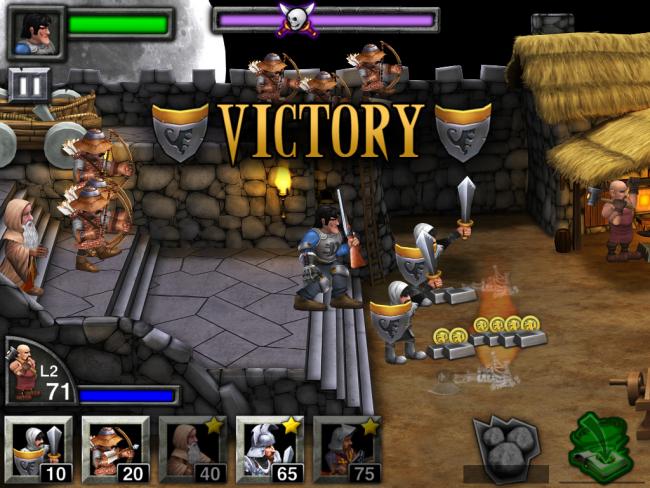 From what we’ve seen, the game appears to depict the film’s final battle in which Ash leads the charge against Evil Ash and his army of Deadites. Will the game focus entirely on this part of the film, or will we be treated to other moments from the franchise?

We targeted this very specific scene within the movie because we thought it would make for the best mobile gaming experience. It allows us to introduce all of the good and evil characters in a consistent and coherent way, and above all keeps the game fun. We are already working on a significant Graveyard scene and Pit mini-game that will be added in the not-so-distant future and will further extend gameplay. The game ships with 50 waves and an unlockable endless wave upon completion of the game.

Army of Darkness: Defense may not be alone for long on the App Store. Trigger Apps is working on a game based on the first film in the series, Evil Dead. Do you have any words for the competition?

I think the more of this extraordinary IP in the market the better. You can never have too many Bruce Campbell lines. I think the scenes from the respective movies are very different and will make for completely different gaming experiences. I wish those guys the best of luck and very much look forward to playing their game.

Does Backflip Studios have any other licensed content in the works? And when are we going to see Paper Toss: Social?

We do not currently have any other licensed content in the works. Our next big project Ragdoll Blaster 3 that will launch late this summer. In addition, we have a solid lineup of three new free games coming out in the next two months. Paper Toss: Social will likely launch early fall.

Want to learn more about Army of Darkness: Defense? Be sure to check out our preview right here on Gamezebo, or pick up the game yourself on May 12th!