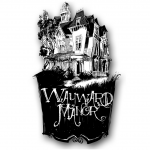 As someone who’s currently studying the publishing industry, I can’t begin to explain how exciting it is to see more and more crossovers between the world of books and my passion for gaming. Well now this new mixing of industries has taken another big leap forward, as hugely successful English author Neil Gaiman has announced that he is making his very first video game, a spooky adventure title called Wayward Manor.

Now in case you haven’t picked up a book in the last ten years or so, Neil Gaiman is most known for his novels Stardust, American Gods, and Coraline, as well as his popular graphic novel series, The Sandman. So, you know, he’s kind of a big deal. The idea for Wayward Manor began when Gaiman realized that his latest story needed to have a more interactive and personal component to it, rather than being just a straight-up novel.

While details of Gaiman’s first gaming story are still a bit scarce right now, we do know that Wayward Manor will take place in a 1920s Victorian Gothic pastoral estate, where players take on the role of a ghost, whose sleepy after-life gets interrupted by a number of strange and intriguing living characters. To handle the development of the game, Gaiman will be teaming up with The Odd Gentlemen, the quirky studio that brought us The Misadventures of P.B. Winterbottom and Flea Symphony.

Gaiman fans who are interested in supporting the game can log on to the newly launched website whohauntsneil.com, which currently functions as a Kickstarter of sorts for Wayward Manor. Here, they can preorder the game, purchase signed posters and t-shirts, and even donate for one of the project’s coveted top rewards: getting your name to appear in the game, or having lunch with Neil Gaiman himself in Los Angeles!

Wayward Manor is being developed for PC, Mac, and tablet platforms, with the first part already set for release sometime in the fall of 2013.

Lost Echo is an adventure game with a hauntingly good trailer