Home / News / Arknights is a Blockbuster Dystopian Strategy Game for mobile, Out Now Globally with a New Heart of Surging Flame Event

Arknights is a Blockbuster Dystopian Strategy Game for mobile, Out Now Globally with a New Heart of Surging Flame Event 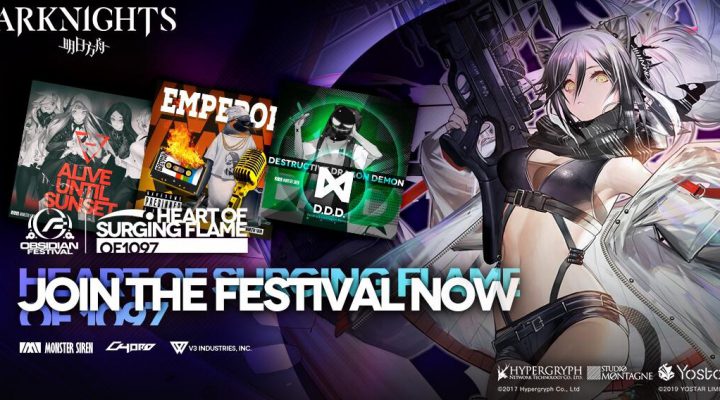 Arknights is a massively popular dystopian strategy game published by Yostar, and it’s celebrating summer with the launch of an in-game event titled Heart of the Surging Flame. Music is a big focus for the event, with a brand new song titled “After It All” composed by renowned Dutch DJs Yellow Claw. Along with the new song, an illustration cover was created by the popular social media illustrator – Vacuum. It’s the first time Arknights EN collaborate with music artists and illustrator at the same time.

As a basic introduction, Arknights is set in a compelling dystopian universe – where unexplained disasters are ravaging the land and uncovering minerals that have created what are known as the “Infected.” To avoid this new threat societies have to stay constantly on the move, creating new buildings and facilities to live in.

You start the game as a ‘Doctor’ with memory loss. You are rescued by a character called Amiya and work as part of the team at Rhodes Island – a pharmaceutical organization that specialises, topically enough, in treating deadly infections and their consequences.

Following the events from Chapter 5, Heart of the Surging Flame sees Kal’tsit suggesting the Doctors and Operators take a short vacation in Siesta – a beach destination known primarily for music event The Obsidian Festival.

As you start the event you have to pick from three performers, with these getting you exclusive furniture and background music to decorate your base with. During the event you’ll need to nab Obsidian Festival Tokens which you can trade for items at vending machines.

Water covers most of Siesta’s map, but as you complete operations you’ll be able to explore it further via the use of volcano tiles. You’ll even get the chance to win a free 5-star Medic unit called Ceylon if you get far enough into the event and beat Operation OF-4.

The other units you can grab during the event are a 6-star Sniper Schwarz, 5-star Supporter Glaucus and 4-star Medic Sussurro – they’re all as useful as Ceylon if used correctly. Then there’s a range of seven outfits to unlock, with Ansel’s being free.

So if you haven’t already downloaded Arknights, this is certainly the perfect time to take the plunge. From the impressive aesthetics to the high-quality collaborated soundtracks – which involves such talents as Bear Grillz and QUIX under Steve Aoki’s record label – Dim Mak, as well as a variety of artists and illustrators from across the world – it’s a game well worth your time.

Anticipated Adventure Game Sequel Mr. Pumpkin 2: Walls of Kowloon is Out Now for iOS and Android

Rocky Rampage: Wreck ‘em Up, Out Now, is an Addictive One Touch Casual Game