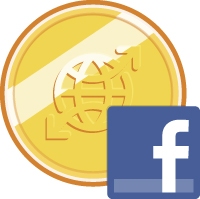 Any regular social gamer or Facebook user knows all about Facebook Credits, the fake currency you must use in order to make transactions on the site. Up until now they’ve been considered fairly harmless, but a pair of attorneys is claiming that the virtual currency is in violation of US antitrust laws, and therefore must be eliminated.

Derek Newman and Brian Strange have created StopFacebookCredits.com, wherein they claim that Facebook has unfairly and illegally forced developers to adopt an unregulated currency system. Basically, the argument goes that since developers are forced to use Facebook Credits for all transactions, and since Facebook unilaterally controls the value of said credits, then the company is in violation of antitrust laws by preventing any sort of competition amongst other virtual currencies.

Our cynical side immediately wants to see this as a move by a couple shark lawyers to file a huge lawsuit which will make them rich and famous, and ultimately that may be all this is. Still, there is an argument to be made that what Facebook is doing is indeed illegal, and it’s not like this is a company which has the most warm and cuddly public image.

Microsoft was previously running a similar system with its MS Points on Xbox Live, but the company is phasing that standard out in favor of direct dollar amounts. That service also caught flak for forcing users to buy points in bundles which didn’t directly correlate to the price of products, thus leaving gamers with leftover points they didn’t really need but had already paid for. While Facebook’s practices aren’t exactly the same, the idea of a virtual currency which is controlled by a company and forced on anyone who wants to do business with them is one which I’m sure the courts will be interested to investigate.

Is Apple going to be overhauling the way apps are discovered?