Home / News / AR Warriors is Like Counter-Strike Meets Pokemon Go, and its Developer is Crowd-Funding a Gun-Shaped Peripheral

AR Warriors is Like Counter-Strike Meets Pokemon Go, and its Developer is Crowd-Funding a Gun-Shaped Peripheral 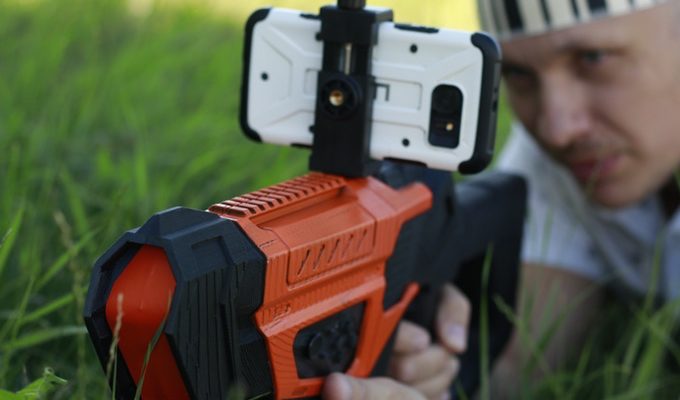 AR Warriors is an AR take on laser tag. It sees you attaching a printed barcode to yourself and then jumping into PvP skirmishes with other players, all viewed through your smartphone, which turns your surroundings into a battlefield in full HD.

Grenades, bombs, and all manner of other in-game elements appear right there on the screen, allowing you to take part in real-life battles thanks to the awesome power of AR technology.

The major advantage of AR Warriors over conventional laser tag is that you can play it anywhere, without having to strap gear on, and at a fraction of the cost. There’s also much more potential scope to the gameplay, since it’s possible to drop all sorts of props and elements into the action via the screen.

It’s a solid concept, but developer Zruchno Service wants to take it a step further with a gun-shaped Bluetooth peripheral to accompany the smartphone shooty fun. And it needs your help to make this tempting prospect a reality.

Zruchno has set up a Kickstarter page for its AR Warriors game controller, with the aim of raising $50,000 by April 18th.

If the campaign is successful, the gun-shaped controllers will go into production. Here’s what they’ll look like in action.

As you can see from the trailer, the AR Warriors controller will effectively turn your phone into a viewfinder. You’ll hold the gun just like a real gun and peer into your smartphone just as you would peer down your sights.

Zruchno promises a sturdy holder that will accommodate all models of smartphone, uninterrupted Bluetooth connectivity, push button control, suitability for players of all ages, and an environmentally friendly ABS plastic construction.

There will be optional add-ons, too, depending on how much you pledge, including an optical sight that turns your smartphone and controller into a sniper rifle.

For $25 you get VIP status in the game and a unique design barcode t-shirt, while a $1015 pledge, all the way at the other end of the scale, will get you five controllers with a special design, ten headbands, five t-shirts, and five optical sights.

Check out the Kickstarter page to learn more about the AR Warriors game controller, and to find out what goodies you could nab by pledging.

And you can download AR Warriors via Google Play and the App Store right now.