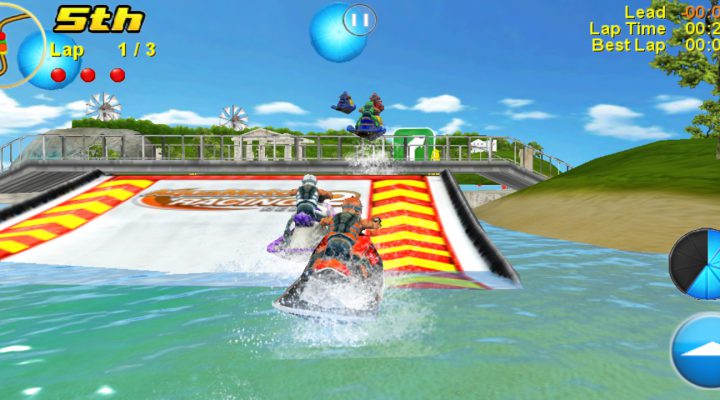 If you think about it, racing on water is not a very sensible thing to do. Not only are we incapable of surviving for more than a couple of minutes in water, but it’s very difficult to get any traction on a surface that’s literally made of the stuff that makes other surfaces slippery.

Still, video games aren’t for being sensible. They’re for having fun. And they don’t come much funner than Aqua Moto Racing 2, a brand new aqua bike racer from developer Zordix.

They don’t come much prettier either. The water in Aqua Moto Racing 2 is a thing to behold, rippling and splashing just like the real thing, which gives you a great sense of chopping through the waves.

Not that you’ll have much time for sightseeing. The game sees you frantically tearing around laps attempting to get ahead of your opponents. All while you need to stay on the right side of the floating flags, execute stunts, and collect cash.

There’s a huge amount to do, with 14 championships to work your way through in pursuit of complete world dominance, starting with beginner and going all the way up to pro. You’ll race in the Tropics, Egypt, and Greece, on every kind of water from river to bay to atoll.

Every race sees you rushing to get to the finish line ahead of your rivals. But this isn’t the only goal. You also need to earn as much cash as you can by collecting the bags of money strewn across the courses and executing stunts.

Whenever you reach a ramp a set of stunt options appear. You can choose to go for a difficult stunt in exchange for heaps of gold but at the risk of wiping out, or you can choose to do a simple stunt for a modest reward. It all depends on how confident you’re feeling.

Also, passing perilously close to buoys gives your turbo meter a little charge, so there’s an incentive to take risks in pursuit of greater speed when it matters. Though your speed will naturally increase as you work your way through the championships, earn gold, and spend it on shiny new aqua bikes. There are 12 to collect.

Aqua Moto Racer 2 has everything you want from an arcade racer — solid graphics, a thumping arcade soundtrack, and enough gameplay to keep you busy for hours. Grab it now on Google Play in both Premium and Free iterations.

PUBG Mobile gets bigger and better with launch of third season