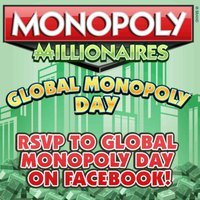 EA and Hasbro have teamed up to declare that today shall henceforth be known as “Global Monopoly Day.” The game developer is hoping to use the day to set a Guiness World Record for most people playing Monopoly Millionaires over a 24 hour period.

The day has already officially started and will run until 11:59PM tonight. You can RSVP over at the official Global Monopoly Day page, which will put you in the running for some prizes, of which there are over $20,000 worth. What, specifically, those prizes are we don’t know, but there will definitely be some sort of Apple goodies mixed in, as well as cash prizes and Visa gift cards.

Once the festivities are over, on April 8, EA will continue the Monopoly love wil sales on mobile versions of the game across the iPad, Kindle, and other platforms.