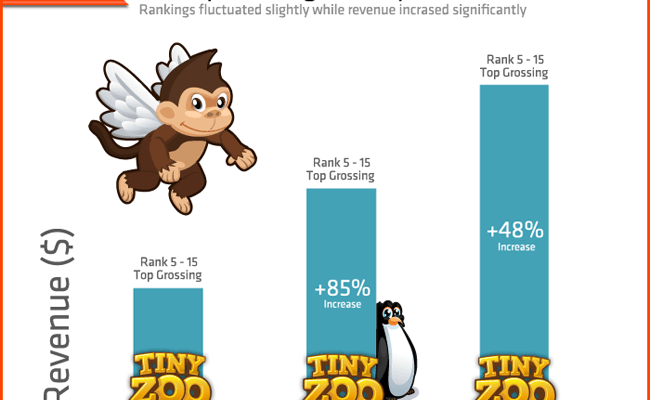 When it comes to Apple’s App Store, the times, they certainly are a-changin’. Just this month at the company’s WWDC conference, they revealed that the mobile marketplace has grown into a booming playing field full of over 650,000 games, toys, and tools. Amid all that growth, though, Apple didn’t talk much about what it takes to succeed amid the competition. As it turns out, somewhere near $5 million a month.

In a blog post summarized by Inside Mobile Apps, the team at developer TinyCo shared some broad numbers that show how cutthroat – and lucrative – the App Store has become. Using their popular Tiny Zoo as an example, TinyCo illustrated that an app looking to rank in between 5th and 15th on the top charts needed to increase its revenue by a whopping 85% between the beginning and end of 2011. And by the beginning of 2012? That same app would need to be earning 48% more cash. That represents an overall need to grow revenues by 133% between the beginning of last year and the beginning of this year. 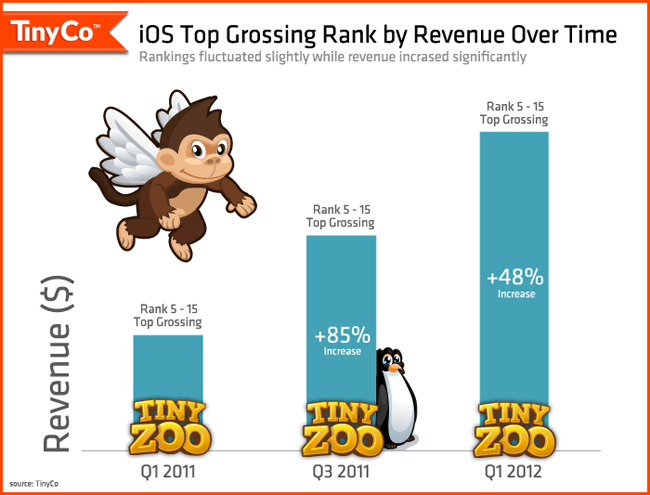 Using that info, IMA calculated that, based on last summer’s reports of top-earners bringing in between $2 and $3 million per month, those same top earners are likely starting at monthly takes of $5 million… or more! Sure enough, they cited games like Epic’s Infinity Blade II, which earned $5 million in the first month of its release. Obscene wealth? It seems there’s most definitely an app for that.

All jokes aside, however, the message is somewhat of a double edged sword for developers. On one hand, making it big means more now than it ever did, and can bring in the kind of money you see lotteries giving away. And yet, the pressure is on to design games that have the instant crowd appeal and long term stickiness necessary to keep consumers buying your app, or making payments within it. All inside a packed ecosystem where “making it big” seems like… you guessed it, a lottery.

If nothing else, the results of TinyCo’s stats. seem to validate the continually growing free-to-play model, which allows developers to create “unlimited income ceilings” by charging nothing at the door, but offering the constant chance to purchase. As cynical as it sounds towards content creators, I personally hope the trend continues. If success depends on going freemium, I have no doubt we’ll see brilliant indie creators and studios exploring new ways to make the model creatively viable as well as monetarily sound, giving you – the gamers – more to play for less upfront cash.

And they say nothing in life is free!

Buzzing around: GameFly co-founder Sean Spector on digital, a post-console future, and how the company stays agile