Apple unveils iPad 2, looks an awful lot like the iPhone 4 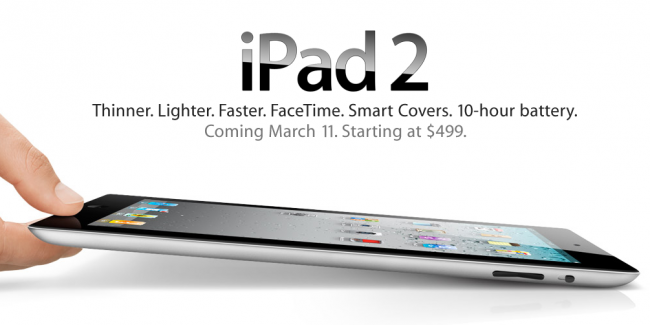 When press invites began circulating last week for a special Apple Event to debut the iPad 2, expectations were set pretty high. Now that the event has come and gone, we know exactly what to expect and when to expect it… but was it everything we’d expected?

While the iPad has had a tremendous first year (and Steve Jobs had no shortage of figures to prove that at today’s event), its successor looks to follow that Apple formula of annual hardware revisions simply for the sake of them. Rather than moving in a new and unique direction, they’ve essentially introduced an update that lets the device catch up to the hardware capabilities of the iPhone 4 – which is something they could have (and arguably should have) done with the iPad during its April 2010 launch.

The iPad 2 will sport Apple’s new A5 chip, which sports dual-core processors that Apple claims makes the CPU up to 2 times fasters and the graphics up to 9 times faster. Asides from this, however, everything this new device can do is no different than what we can already do on the iPhone 4. What’s worse, it’s not even playing catch-up all that well. The one thing I had thought was pretty much a no-brainer for the iPad 2 was Retina Display, and it’s the one thing that’s mysteriously absent.

Do these new changes make the new iPad better for gaming? Absolutely. Do they make it worth upgrading from the original iPad? As someone who constantly laments the iPad’s lack of Retina Display I’m leaning towards no, but with that exception you could just as easily read our should you upgrade to the iPhone 4 article from last June to decide. But is there enough new here to really get excited about? Absolutely not.

Speculation time: If I were a betting man, I’d say that Apple is introducing the iPad 2 as a catch-up device solely to make the iPad and the iPhone identical in terms of specs. This way, going forward, they can do their product updates at the same time each year. Apple really had two choices when you think about it: make the iPad as different as possible from the iPhone so it stands out, or as similar as possible so it’s familiar and approachable. From an App Store standpoint staying similar makes the most sense, as it allows devs to develop for both platforms with ease.

Congratulations on the iPad 2, Apple. You’ve created yet another annual product revision that does what we’d all hoped last year’s model would have, forcing a legion of blindly obedient die-hards to begrudgingly make the upgrade. At the very least I can thank you for not adding Retina Display so that I won’t be amongst them.

EA Partners to lend a hand to social and mobile developers