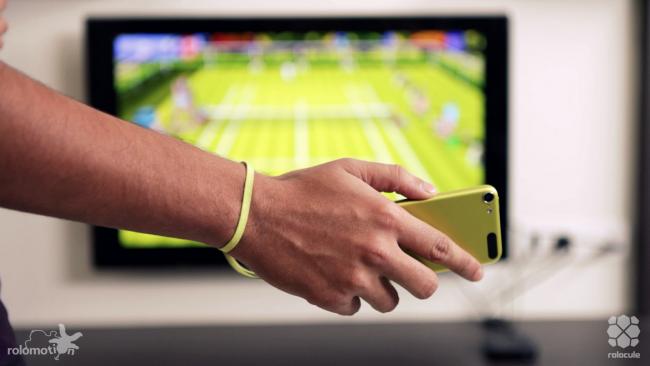 When the iPhone debuted six years ago, Apple did something that few would have ever thought possible: they redefined the handheld gaming space.  Until then it seemed like a market that Nintendo would dominate forever.  Based on this success, many have speculated that it would only be a matter of time until Apple would make a notable push to bring their style of app-based gaming to the living room.  But the seemingly inevitable can’t come soon enough for Rolocule Games.

The India-based developer unveiled a new technology this week called ‘rolomotion.’  Working in conjunction with your existing Apple TV, rolomotion utilizes the motion-sensing capabilities of your iPhone to create a motion-controller experience not unlike the Wii.  Players will hold an iPhone in their hand, swinging and moving in play, and their on-screen avatars will mimic their actions just as you would see with a Wiimote.

To showcase this technology, Rolocule has released a promotional video that features the first game to support rolomotion: Motion Tennis.  The fact that the Wii’s own success is intrinsically tied to the launch of Wii Sports Tennis is an irony that’s not lost on us, though Rolocule’s CEO Rohit Gupta and COO Anuj Tandon make it pretty clear that is little more than a likely coincidence.

“There are two primary reasons we selected tennis to showcase rolomotion. Firstly, our last game was Flick Tennis: College Wars, which also won the People’s Choice Award at the 8th International Mobile Gaming Awards (IMGA) in 2012. So we already had an incredible tech ready for a tennis game. Secondly, we believe that tennis as a sport gives the best experience when it comes to playing games using natural motion gestures.”

One of the major selling points of Rolocule’s technology is that interested gamers won’t need to buy additional hardware to use it – they can simply use their existing iPhone and Apple TV.  And if your gut reaction, like mine, was “but how many people actually own Apple TV?”  The answer might surprise you.  The company sold two million units during the holiday 2012 quarter.  And if Apple’s rumored 60-inch iTV hits store shelves this year, that number has the potential to grow by leaps and bounds.  And Rolocule?  They’re ready for it.

“Since they are rumours, it wouldn’t be correct to speculate on them. Having said that, we have taken into consideration the possibility of such a product from Apple internally in our strategy.”

But while changing technology is something the team can prepare for, predicting public interest can be a little harder.  A number of notable companies have attempted to enter the motion control market in the wake of Nintendo’s success, but never managed to get it quite right.  “We could have done a better job,” admit’s Sony UK’s Fergal Gara about the PlayStation Move.  So what makes rolomotion different from all the rest?

“We are focusing on existing iPhone/iPod Touch consumers who like to play casual games and who wants to have more fun with their iOS devices. For those who don’t have an Apple TV yet, in addition to its other features, Apple TV holds a cost advantage as compared to dedicated motion game consoles like PS Move or Wii. Rolomotion is a win-win for consumers – since in addition to already powerful multi-touch controls, it introduces new and simpler ways to play games which, in turn, loosens creative constraints on game developers leading to more and richer gameplay experiences for the consumers.”

There are other hurdles that Rolocube Games will have to overcome as well if they want rolomotion to succeed.  Airplay – Apple’s own method of connecting iOS device and Apple TV together – has been notably laggy for some gamers, and it’s Airplay that rolomotion utilizes to tie the two devices together.

“Yes, gaming through Airplay mirroring on Apple TV has been suffering from lag issues. With the first rolomotion-powered game, Motion Tennis, we have reduced the lag to a large extent through in-game optimizations. We understand that Airplay mirroring for gaming is not the best at the moment as compared to other game consoles, but since motion gaming on Apple TV is potentially a disruptive technology, we believe that it will improve with time. We believe that Apple TV holds a huge potential and rolomotion is our first step in that direction.“

Despite the uphill battle they seem to be facing, rolomotion is a technology with a lot of potential.  Rolocule Gamest tells us that they have “a couple of games in the pipeline” that will take advantage of the technology in “genres other than sport.” And while they’re currently keeping the technology in-house for now, they haven’t ruled out the possibility of offering it other developers in the future.

Interested in trying out Rolocule Games’ Motion Tennis for yourself?  You can sign up for the beta at http://www.rolomotion.tv.